See LIFEMARK In Theaters This Weekend!

God makes a home for the lonely;

He leads out the prisoners into prosperity,

Only the rebellious live in parched lands.

LIFEMARK is the first Kendrick Brothers production based on a true story, and God truly orchestrated the perfect timing for the release of a film that addresses themes of unwanted pregnancy, family bonds, God’s grace, and Holy Spirit-led reconciliation.

What the Lord began with a few friends sharing an impactful documentary in 2019 has now become the biggest Kendrick Brothers production yet. LIFEMARK is showing in theaters across the country this weekend for audiences to enjoy through laughter, a few tears, and a renewed call to step away from unproductive arguments and into a lifestyle of being the hands and feet of Christ.

LIFEMARK is more than a fun Friday night family film—it holds up a mirror, asking the viewer to see themselves in the movie, and ponder how the lessons from LIFEMARK cross over into the lived experiences happening right now in every community. 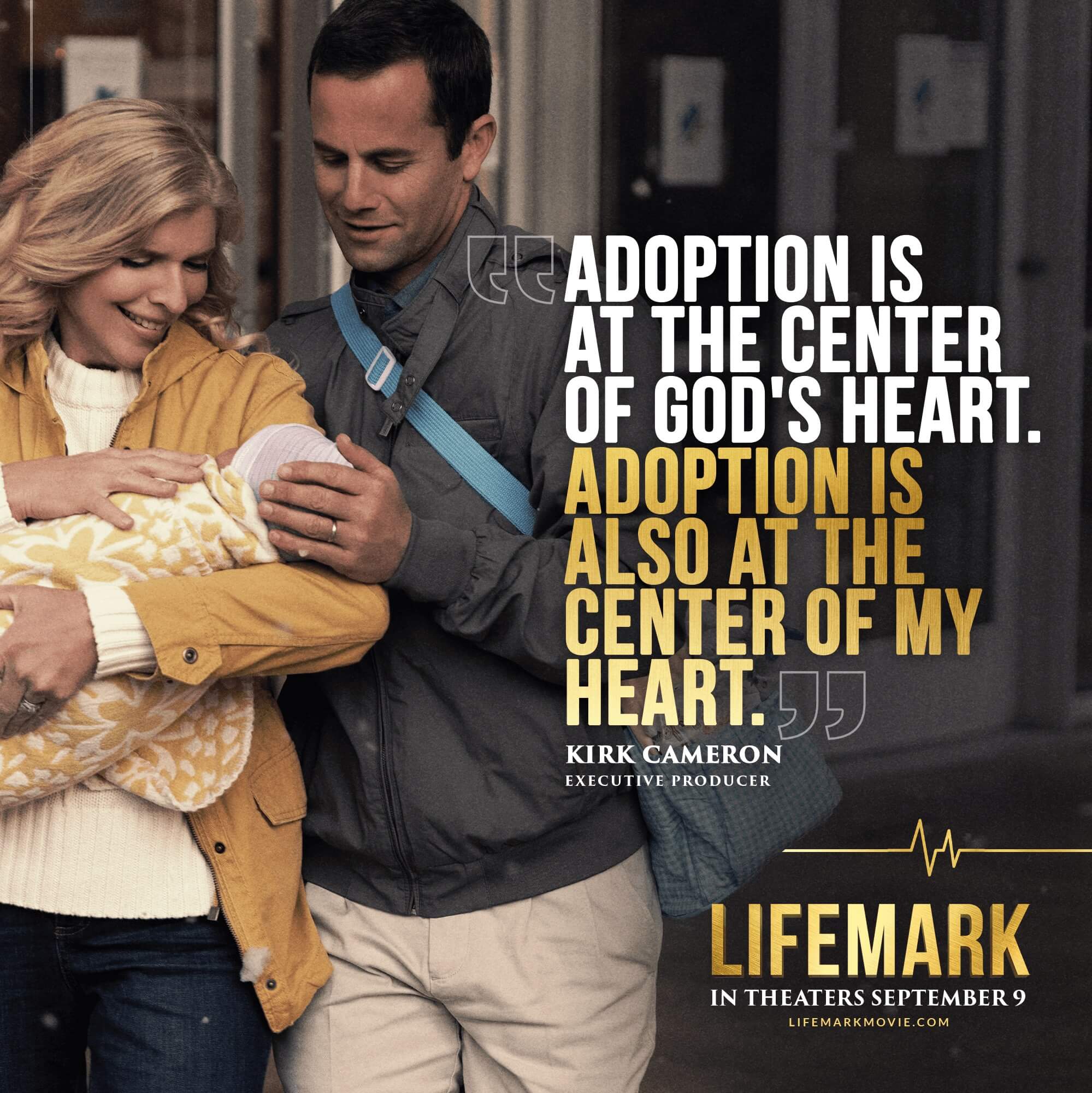 “People love to be entertained, people love stories, and stories deeply affect people,” said Kirk Cameron, who plays a starring role in the film and is also the executive producer.

Cameron saw the real-life account that LIFEMARK is based around and knew that the Lord was leading him and the Kendrick Brothers to bring these important truths to moviegoing audiences.

“A friend sent me the documentary, I Lived On Parker Avenue and it just wrecked me,” said Cameron. “The movie LIFEMARK deals with a subject close to my heart. I have six kids, and four of them are adopted, and my wife is also adopted.”

LIFEMARK is based on the true story of a young man named David, who goes in search of his birth parents. He is reaching the end of his adolescence, with all the different questions that come with that season of life, such as of what his life should look like and who he is. David’s journey to find his biological parents profoundly shapes his faith in God, his outlook on life and who he knows himself to be.

In the process of connecting with his biological mother, she reveals that she considered having an abortion—even going so far as to make an appointment for the procedure. As she began the appointment, she felt God tell her to get up and leave. David’s mother chose to carry her child to term, and with the help of David’s biological father, chose a loving adoptive family for their son.

David surprises his birth parents by thanking them when they meet. Where they expected bitterness and anger for giving him up, their son showed gratitude for choosing life for him. In real life, David and his adoptive family recorded these interactions, which later became the documentary, I Lived On Parker Avenue.

“In 2019, we heard from Kirk and saw I Lived on Parker Avenue,” said Stephen Kendrick, an executive producer for LIFEMARK. “It’s a story of reversal. David said ‘thank you’ instead of ‘I hate you.’”

Alongside his two brothers, Alex and Shannon, Stephen previously produced Facing the Giants, FIREPROOF, Courageous, and War Room—all movies that continue to entertain audiences and change lives through the Biblical truths portrayed in the films.

Cameron and the Kendricks had no idea that after three years of hard work bringing the movie to life, the historic reversal of Roe V. Wade would arrive just a few weeks before the release of the movie that promotes adoption over abortion. In a day where ongoing pro-life vs. pro-choice debates happen every day across our country, this movie presents unique insight and prayer prompts to discuss what it looks like to “choose life” by portraying the real experiences of real people.

“We need to look at this issue through the lens of love,” said Cameron. “Looking at this through love brings clarity and courage.”

LIFEMARK strikes a delicate balance of confronting the difficult realities of infertility, unexpected pregnancy, and reconciling with family members in moments of deep pain, all with godly grace and a sense of humility. There is no condemnation in the movie. Even for someone who has considered abortion, had an abortion, or encouraged someone to seek an abortion, LIFEMARK expresses hope for the future through Christ, and redemption and abundant grace in God.

“We want to use this film, and the website, to supply as many resources as possible for churches and crisis pregnancy centers to use for their communities, and for people going through this crisis,” said Alex Kendrick, an executive producer of LIFEMARK who also plays a key character in the film.

LIFEMARK is an answer to prayer. A high production-value film that professes God’s design for life, where families can enjoy an exciting, funny, and heartfelt movie that sparks deeper conversation with one another and the Lord.

“In watching LIFEMARK, you’ll develop a heart for what God’s heart beats for,” said Cameron.

We keep praying for the Kendrick Brothers, Kirk Cameron, and all the other brothers and sisters in Christ who faithfully labored to see this movie written, directed, filmed, edited, and promoted. We come in agreement with wisdom from Alex Kendrick: “Prayer is the wind in the sails in the ministry of the Church.”

Will you pray right now?

Lord Jesus, You are all knowing; nothing escapes Your sight. I praise You for moving in a mighty way to bring this true story of life and redemption to mass media in our country. I invite your Holy Spirit to be present at every showing of this movie, that the Gospel will be proclaimed and take root in thousands of souls. Make tender the hearts of everyone who watches the movie, to see where they can be serving and leading to care for both unborn infants, as well as children and parents in need across our country. Lord, guide the efforts of our brothers and sisters in the film industry to continue producing entertainment that glorifies You, the Author of Life.