For the law of the Spirit of life in Christ Jesus has set you free from the law of sin and of death. Romans 8:2 NASB

Next week, on February 1st, as a nation, we will observe National Freedom Day, which was established in January of 1949 by Congress and then President, Harry Truman. The law reads: 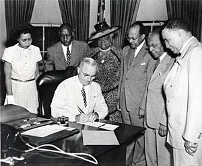 The President may issue each year a proclamation designating February 1 as National Freedom Day to commemorate the signing by Abraham Lincoln on February 1, 1865, of the joint resolution adopted by the Senate and the House of Representatives that proposed the 13th amendment to the Constitution. — U.S. Code § 124 – National Freedom Day

The 13th Amendment that it commemorates was passed by Congress on January 31, 1865 and signed by President Abraham Lincoln on February 1st of the same year. It abolished slavery in the United States and provided that "Neither slavery nor involuntary servitude, except as a punishment for crime whereof the party shall have been duly convicted, shall exist within the United States, or any place subject to their jurisdiction."

Next Monday, as citizens of this nation, we will thank God for our personal freedoms and that we live in a country where slavery and involuntary servitude have been abolished, and we will remember the brave men and women like Major Richard Robert Wright Sr., Dr. Martin Luther King Jr., Rosa Parks, and scores of others who made a stand and fought for our rights and freedoms. We will also pray that our leaders will continue to stand and fight to ‘ensure the blessings of liberty to ourselves and our posterity.’

As citizens of Heaven, though, we also pray that our nation will experience the freedom and liberty that we can only find in Jesus by the power of the Holy Spirit. Freedom and liberation from slavery and involuntary servitude to sin. The Greek word translated freedom or liberty in the scriptures is from a root word that has inherent in its meaning, ‘freed, liberated, and unshackled from slavery or bondage.’ We will thank God that the “law of the Spirit of life” has set us free from “the law of sin and of death.”, and we will pray that family members, friends, and fellow citizens will experience the same by the grace of God. We will pray and stand on the biblical foundation and constitutional promise of the 13th Amendment, that in our nation, ‘No slavery nor involuntary servitude’ spiritual or physical – ‘shall exist within the United States, or any place subject to their jurisdiction.’

Pray with us … Lord, pour out your Spirit upon our nation next Monday and throughout this year. Free us, liberate us, and unshackle us from our slavery and bondage to sin. Cleanse and purify us, beginning with the household of God. Raise up your army to pray for YOUR love, YOUR life, and YOUR liberty to be poured out upon this nation that so desperately needs YOU. Lord, let YOUR FREEDOM RING! In Jesus name, Amen.