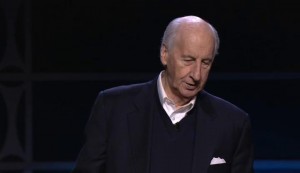 
Jack Hayford knows the awesome power of God firsthand. When he was a baby, he was gripped by a life-threatening illness. But as a result of the earnest prayers of friends and family, he was miraculously healed. The doctors had no other explanation except that the grace of God snatched him back from the brink of death. Several years later, Jack was struck down again by sickness. This time it was polio. The church elders anointed him and prayed for his recovery. God heard their petitions and granted a second miracle. These two extraordinary events ignited in Jack's heart a passion for God and convinced him that the Holy Spirit is alive and active in the contemporary church. "Contrary to our preconceptions, God is not economical with healings and miracles. Such wondrous works are frequently attending the proclamation of truth in Jesus' name," asserts Pastor Jack.

Jack Hayford serves as President of The Kings University (formerly The King's College and Seminary) in Los Angeles, which he founded in 1997. From 2004 to 2009, he also served as President of The International Church of the Foursquare Gospel. He is probably best known, however, as "Pastor Jack," founding pastor of The Church On The Way in Van Nuys, California, where he served as senior pastor for more than three decades. A prolific and best-selling writer, Pastor Hayford is the author (or co-author) of more than 100 books and has composed 600 hymns and choruses, including the internationally known and widely recorded "Majesty."

He is an acknowledged "bridge-builder," helping to forge healthy bonds among all segments of the Body of Christ. He is recognized for his balance in preaching the Word, avoiding extremes while not diluting or compromising the demands of truth. Pastor Jack's heart to bring unity across all denominational and racial boundaries has given him an open door to minister in all kinds of settings

Dr. Hayford and his wife, Anna, have four children, eleven grandchildren, and a growing number of great-grandchildren.