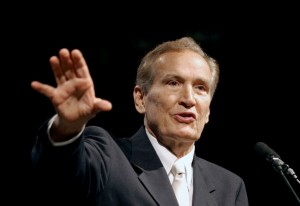 Known for his evangelistic zeal and uncompromising commitment to the Word of God, Adrian Rogers was one of the greatest preachers, respected Bible teachers, and Christian leaders of our time. For over fifty years, he consistently presented the Good News of Jesus Christ with strong conviction, compassion, and integrity.

He was a devoted family man — husband to his childhood sweetheart Joyce, father to four children, grandfather to nine, and great-grandfather to one. Of all his accomplishments, Dr. Rogers often said his greatest joy centered in his relationship to Jesus Christ, his wife and family, and the church he pastored. The recipient of many honors and awards, the trophy he treasured most was one presented to him by his children one Father’s Day in which he was proclaimed The World’s Greatest Dad.

Under his pastoral leadership, Bellevue Baptist Church in Memphis, Tennessee, grew from 9,000 members in 1972 to more than 29,000 at his retirement in 2005. And Adrian Rogers was a leader in his denomination, serving three terms as president of the Southern Baptist Convention, which is the world's largest Protestant denomination of 16 million members.

God’s blessing on Dr. Rogers’ ministry became even more evident with the birth of Love Worth Finding Ministries in 1987. Dr. Rogers was the founder and Bible teacher of Love Worth Finding, an internationally syndicated television and radio ministry. The sun never sets on this ministry which is broadcast on radio, television, and the Internet. You can find LWF declaring the Gospel and changing lives in more than 150 countries around the world. In 2003, Dr. Rogers was honored to be inducted into the prestigious Hall of Fame by the National Religious Broadcasters.

Dr. Rogers was active in national leadership and personally consulted and prayed with five presidents of the United States. He visited and had the privilege of sharing the platform with President George W. Bush in the White House on the National Day of Prayer for America.

In November 2005, God called Adrian Rogers home. Since that time, tributes have poured in testifying of his worldwide impact. For more information, visit www.adrianrogers.org.