Vonette Bright is with Jesus

It is with heavy hearts that we share with you that Mrs. Vonette Bright went home to be with Jesus this afternoon and we are confident she is worshiping God alongside her husband, Bill Bright, who passed away in 2003 after almost 55 years of marriage. 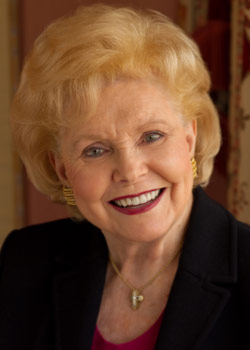 “Today, I have lost a dear friend and we will miss her. What an impact she has made for the kingdom. She is a great saint and I know she is hearing those words ‘well, done thy good and faithful servant.’” - Mrs. Shirley Dobson, Chairman of the National Day of Prayer Task Force

Among her other work, Vonette has authored more than a dozen books, and in 1993, she launched Women Today International, a ministry to and for women. She was also instrumental in the formation of Campus Crusade for Christ (known as Cru in the U.S.), alongside her husband Bill. Together they spent more than 50 years serving and watching the Lord grow the ministry to over 27,000 staff members and 225,000 volunteers in 190 countries.

Vonette is survived by her 2 grown sons, her 4 grandchildren and thousands of prayer leaders and volunteers who have stood in the gap due to her example. She will be deeply missed.

Learn how you can make a contribution to the Legacy of Prayer Fund, developed in honor of Mrs. Vonette Bright >>