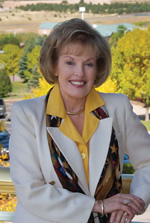 As Chairman of the National Day of Prayer Task Force, I’d like to take this opportunity to speak to you about a matter that is crucial to the future of our nation – prayer!  In 2 Chronicles 7:14, the Lord proclaims “If my people, who call on My name, will humble themselves and pray and seek my face and turn from their wicked ways, then I will hear from heaven, I will forgive their sins, and I will heal their land.” This verse makes it clear that God cares about and responds to the attitudes and actions of His people. The continuing moral decline in our nation and the battle over the definition of traditional marriage is a troubling indicator that the most fundamental pillars of our society are hanging in the balance. This serves as an urgent wake-up call that we cannot become complacent in striving to uphold the beliefs that provided the very framework upon which our beloved country was established.

History has recorded a wealth of evidence that our founding fathers intended the United States to be a haven for those dedicated to biblical truth.  These men had the foresight not only to install constitutional safeguards to our freedoms, but also to warn of what would occur in the absence of these ideals.  Daniel Webster said it this way: “To preserve the government we must also preserve morals.  Morality rests on religion; if you destroy the foundation, the superstructure must fall.  When the public mind becomes vitiated and corrupt, laws are a nullity and constitutions are waste paper.”  What a chilling description of where we are today!

Patrick Henry articulated a similar caution:  “The great pillars of all government and of social life [are] virtue, morality, and religion.  This is the armor … and this alone, that renders us invincible.”  His exhortation brings to mind the verse in Scripture that points to the source of our effectiveness as Christ’s representatives: “‘Not by might nor by power, but by my Spirit,’ says the Lord Almighty” (Zechariah 4:6).  The strength of our nation lies not in our military prowess (though that is certainly important to our defense), but in our commitment to absolute truth.

As I mentioned in our last newsletter, the theme for the 2014 National Day of Prayer observance is “One Voice, United in Prayer,” based on Romans 15:6: “So that with one mind and one voice you may glorify the God and Father of our Lord Jesus Christ.”  This is undoubtedly a time of desperate need for the United States.  The virtue that once defined our country is deteriorating rapidly and is being invaded by evils such as pornography, abortion, infidelity, same-sex marriage and the agenda of the far Left.  We must humble ourselves before Almighty God and seek His forgiveness and restoration.

While America’s present depravity often seems irreversible, Scripture assures us that it is never too late for repentance.  Thankfully, we serve a God who stands ready to work in ways that exceed all of our expectations.  His Word offers this heartening reminder: “Surely the arm of the Lord is not too short to save, nor His ear too dull to hear” (Isaiah 59:1).  If we will remain on our knees and do our part to defend morality, we have every reason to believe God will respond mightily.

In these few remaining days leading up to the 2014 National Day of Prayer on May 1 – and on that occasion, in particular – it’s my prayer that the Body of Christ will recommit itself to vigilant and unceasing intercession.  If we do not weary in this, there’s no telling how powerfully God will answer!

Along with my letter, you will find our April Newsletter enclosed with a number of ways you can get involved. In fact, May 1 is not the end but rather the beginning of a six-month effort to mobilize our nation to prayer. Early indicators suggest that this National Day of Prayer will be the largest ever recorded and it will also be the starting block for a revival focused initiative where our team will take to the road in a specially equipped bus for the Pray for America Rally Bus Tour II, which will conclude October 1st in Hollywood, California where a five-day prayer gathering, we call The Summons, will take place. Our prayer is that thousands of people will engage and thousands more will give their lives to Jesus Christ.

I ask you to prayerfully consider financially partnering with us as we stand in the gap for our beloved country. There has been no more critical time in our history – much is at stake.  May I count on you to support our mission?  Become a Friend of the National Day of Prayer today. Together, we can make a difference!