Standing Ovations at the National Observance

[typography font="Cantarell" size="24" size_format="px"]"Pray that we will be able to weather the storm that I am almost certain will come – that we will not be required to put aside our Constitutional rights." - Rear Admiral William D. Lee[/typography] [hr]

Every year, the National Day of Prayer Task Force coordinates several events on Capital Hill including the National Observance at the Cannon House Office Building. With speakers like Chuck Swindoll, Oliver North, Max Lucado, Beth Moore, and Franklin Graham, the expectations are always high and the response is overwhelming. More than one hundred thousand people tune in live, via video stream, for what is sure to be a prayer event highlight reel as representatives from each branch of government, prominent ministries, and businesses share encouraging and convicting messages with ambassadors, delegates, and individuals from all walks of life in the historic Caucus Room – and the 62nd annual National Day of Prayer observance did not disappoint.

The morning began promptly at 9:00 a.m. eastern with the presentation of the colors by the Joint Armed Forces Color Guard and the National Anthem by the Brass Quintet. Mrs. Shirley Dobson, Chairman of the National Day of Prayer Task Force, kicked off the momentous celebration with a warm greeting and introduction of both Rabbi Daniel Lapin and Rabbi Neal Surasky.

Rabbi Daniel Lapin took the podium first and blessed the occasion with eloquent words of personal evaluation as to how we view the exercise of prayer; “It is the entirety of the Bible that is the blueprint to goodness, decency, hope, optimism and faith. Prayer is not surrendering to the spasm of superstitious reflection, rather, prayer is asking God and supplicating to God.”

Rabbi Neal Surasky then put the Shofar to his lips and belted out what seemed to be the longest held note to echo throughout the halls of Congress in the history of our nation. At that moment, we knew the prayer event had begun.

...Our nation is under the care and providence of Almighty God and has confidence that He will guide the course of our nation..." - Father Jerome Magat

The line-up of speakers that followed were second to none with each building on the other and driving the message that prayer is the only hope for America. With the opening prayer from Father Magat, who stated that “our nation is under the care and providence of Almighty God and has confidence that He will guide the course of our nation”, to the powerful words of Barry Black, chaplain of the Senate, who urged people to stop praying for just themselves and to start praying for their leaders, even if they disagree with their politics. "Let us stop praying only for ourselves, adding that “Godliness is a national security issue." Indeed, the National Observance was not one to miss.

Pat Boone, an original member of the National Day of Prayer Task Force in 1988, reminded us that America's founding fathers embraced religious practice and Christianity. “Benjamin Franklin called for a daily sermon before Congress began deliberations. John Jay, a member of the Supreme Court, said that Christians were preferred for government positions.” He then quoted Proverbs 21:1 which says, "In the Lord’s hand the king's heart is a stream of water that he channels toward all who please him.” Then added these words, "Heaven is waiting for our decisions and our petitions."

...With God nothing is impossible and God can turn America around.” - Pastor Greg Laurie, 2013 Honorary Chairman

This led up to the message by the Honorary Chairman, Greg Laurie, who said, “With God nothing is impossible and God can turn America around.” After his powerful words of affirmation, hope and inspiration, he closed with the reading of the national prayer.

Finally, it was Rear Admiral William D. Lee who ended the 3-hour event with five, yes 5, standing ovations. He gave a desperate appeal for prayer asking all to lift up the armed forces at such a critical time in our nation’s history. “Pray that we will be able to weather the storm that I am almost certain will come – that we will not be required to put aside our Constitutional rights,” he said. General Jerry Boykin issued the following statement after hearing the passionate and courageous message; "Rear Admiral William Lee demonstrated real courage yesterday when he spoke at the National Day of Prayer event in the nation's capital. I have seen courage manifested in many ways, including the ultimate sacrifice of one's life for one's country, but this type of moral courage is becoming more and more rare...You want a real hero? Just look no further than Rear Admiral William D Lee.”

If you missed it, then listen now to the 2013 National Observance: 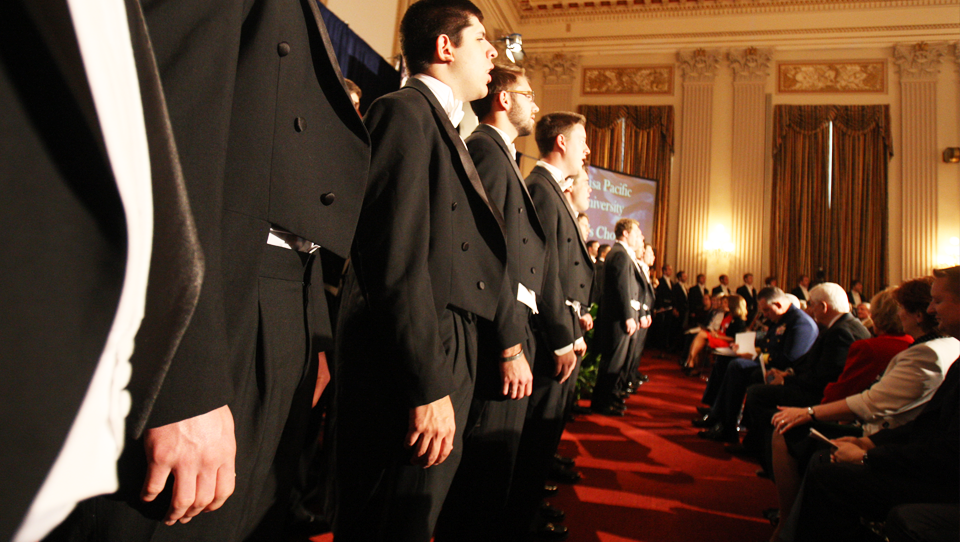