Lessons from the Life of Daniel

Posted on Articles by Nancy Quin · March 09, 2015 3:48 AM
If anybody understood politics and the rise and fall of administrations, it was Daniel. His initial experiences were with Nebuchadnezzar, king of the Babylonians from 605-561 B.C. You probably know the story. Nebuchadnezzar had a dream and Daniel interpreted it. Daniel and his three friends got promoted, but next there was a plot against them. Daniel’s three friends were thrown into a blazing furnace. They were supernaturally delivered and even Nebuchadnezzar praised the God of the Hebrews. Nebuchadnezzar’s son, Belshazzar, assumed the throne and threw a big party. The finger of God miraculously appeared and wrote on the wall. Daniel interpreted the words. The message predicted Belshazzar’s demise, which brought Darius the Mede to the throne. Shortly after this we find Daniel in the lion’s den. Daniel’s deliverance in the lion’s den caused Darius to honor God. The story continues ...

It is in Daniel, chapter 9 that we gain tremendous insight into the character of Daniel and how he handles the roller coaster of political leadership. Here are a few aspects of Daniel’s life that act as examples to us:

He was a man of faith: “Then I set my face to the Lord God to make my request by prayer and supplication with fasting, sackcloth and ashes.” (Dan 9: 3) Daniel was not a young man at this point and with all the ups and downs, he was still full of faith. He remained willing to fight for God’s purposes to be brought to earth. He easily could have given up many times before, but yet he expectantly interceded for his people. Daniel knew that at any point the King could receive a vision, a message, or writing “could appear” on the wall.

He carried a burden for the sins of his people: “… we have sinned and committed
iniquity, we have done wickedly and rebelled, even by departing from Your precepts and Your judgments.” (Dan 9:5) Even though Daniel himself walked uprightly with God, his heart was pained that his fellow Jews did not. To the American mind this seems preposterous, but it is a great lesson for us—to accept a greater responsibility through prayer and discipleship for how fellow believers walk with God.

He understood the connection between faith and reality: “… the Lord has kept the disaster in mind and brought it upon us …” (Dan 9:14, 16) In Daniel’s mind there was an obvious connection between disasters and people’s sins. To him it appears that God, though long suffering, is not a God who will forever permit people to behave the way they desire. As with individuals, God has the ability to corporately guide a nation’s actions by the retributions and calamities He permits them to experience. After national disasters it is suddenly acceptable to say “our thoughts and prayers are with you.” The rest of the time there are ongoing efforts to eliminate public prayer.

We can learn much from Daniel. We have seen many political ups and downs in recent days. While the present seems particularly dark, we must remain people of expectant faith. With “fasting, sackcloth and ashes,” we must continue to intercede for our country. At any point God’s finger could write on the wall of the Oval Office and deliver words that could transform many things in short order. We also must surrender our self-centered individuality in order to carry a burden for the righteousness of all the followers of Christ. We need to be pained at the things that pain God’s heart.
—Dave Kubal serves as President / CEO of Intercessors for America

What Does the Lord Require of Us? 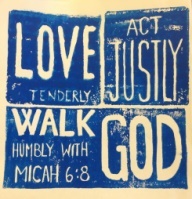 “If that nation against whom I have spoken turns from its evil, I will relent of the disaster that I thought to bring upon it.  And the instant I speak concerning a nation and concerning a kingdom, to build and to plant it, if it does evil in My sight so that it does not obey My voice, then I will relent concerning the good with which I said I would
benefit it.”  —Jeremiah 18:8-10

These are troubling questions. Yet, we can find answers in Micah 6:8 that provide a lens to view today’s events as we pray for America. “He has shown you, O man, what is good; and what does the Lord require of you, but to do justly, to love mercy and to walk humbly with your God?”

God prescribes a three part definition for a nation to do “what is good” in His sight.

Do Justly.  Justice is the quality of being righteous or fair—seeing that people receive what is morally right, fair and appropriate. Justice also includes the concept of upholding law and order, as in the work of police, judges, and the courts.  For over 200 years our judicial system has been based upon Judeo-Christian values and principles.  Our founders understood how important it was for an external, unchanging code of ethics, derived in great measure from the Bible, to rule our judicial system.

One assault on justice that other countries are experiencing is when Muslim politicians, officials and judges move into power and begin to insert Islamic “sharia” law, a harsh system of law derived from the teachings of the Koran.  America has already had one congressman swear an oath to the Koran as he began his service to the Congress.  We need to intercede and win our Muslim neighbors to Christ; an even more intense spiritual battle is coming.  We must prayerfully guard Judeo-Christian justice in this country.

Love Mercy.  Mercy has an emotional element that is a compassionate concern for those that are in need.  We must pray that God would protect us as a nation from becoming emotionally desensitized to the legitimate needs of others.  Studies continue to show that one of the biggest influences upon the minds of our children which inhibits them from developing hearts of mercy is violent video games, now accessible even via cell phones.  H. R. Bill 5990 introduced by Rep. Jim Matheson (D-UT) is an attempt at preventing minors from purchasing these types of games.  Efforts such as Rep. Matheson’s need to be encouraged and covered in prayer.

Walk Humbly.  The need to humble ourselves and rely on God is the single most important element established by our founding fathers which enabled the success of these United States.  Our nation’s motto, “In God We Trust,” was printed on U.S. coins because one man,  Rev. M. R. Watkins from Ridleyville, PA, wrote to the Secretary of Treasury on Nov. 13th 1861 stating, “…This would place us openly under the Divine protection we have personally claimed.  From my heart, I have felt our national shame in disowning God....”  It would be hard to say it any better.  We must continue to intercede for all in authority and for individuals like Rev. Watkins as they labor to lead us as a nation into humility.

As we consider how we can tip the scales from corporate evil to doing “what is good” in God’s eyes, we must earnestly pray, speak out, and take action to preserve our Judeo-Christian judicial system.  We must fight for policies of justice and mercy on our knees, and through humble, persuasive action.  We need to Get America Praying!

—Dave Kubal serves as President / CEO of Intercessors for America