OF THE NATIONAL DAY OF PRAYER TASK FORCE

WASHINGTON, D.C. (May 5, 2016) – In a span of only 25 years, under the direction of Shirley Dobson, the National Day of Prayer has been observed at over 630,000 events with more than 33 million people praying for America. Today, a new chapter begins as Mrs. Dobson steps into the role of Chairman Emeritus and passes the mantle of leadership to Mrs. Anne Graham Lotz.

“After much prayer and careful consideration, I am pleased to announce that Mrs. Anne Graham Lotz, daughter of Dr. Billy Graham, has graciously accepted this new role, and will succeed me as the new chairman of the National Day of Prayer Task Force,” said Dobson.

The New York Times named Anne Graham Lotz whom her father, Billy Graham, refers to as “the best preacher in the family”, one of the five most influential evangelists of her generation.  She is also a prayer warrior, powerful speaker, best-selling author and the founder and president of her own organization, AnGeL Ministries. Anne’s latest book, The Daniel Prayer: Prayer That Moves Heaven and Changes Nations, releases May 10, and will encourage, equip and engage readers in effective, passionate prayer.

“For the past three years I have felt a compelling urgency to pray,” said Lotz. “As a result my organization, AnGeL Ministries, has offered five worldwide prayer initiatives that have drawn tens of thousands into prayer.  So when Shirley Dobson asked me to succeed her as the Chairman of the National Day of Prayer Task Force, I was highly honored.”

“I believe I’m called by God to those everywhere who call on the name of our Lord Jesus Christ (1 Corinthians 1:1-2),” Lotz added. “I will continue to lead AnGeL Ministries as I accept this new assignment to not only get people into God’s Word, but also onto their knees in serious prayer for our nation.”

Americans have championed religious freedom since our earliest days. Many who first sought our shores were fleeing tyranny in search of a land where they could attain liberty and exercise their faith without constraint. As our forefathers labored to lay the groundwork for our republic, they asked God to illuminate their understanding and boldly spoke of His guidance and care. Through the years, personal and corporate prayer has been a source of courage and endurance in affliction, direction and wisdom in uncertainty, and hope and confidence in adversity. In times of prosperity, prayer has conveyed our humble gratitude for our good fortune.

That commitment to faith and prayer has been instrumental in bringing us to this point in history and must not be forgotten. If we are to retain our strength of character, maintain the trust we have been given to uphold, and advance the tenets of our republic, it is necessary to preserve this vital aspect of American life.

Sixty-five years ago, Congress established an annual “National Day of Prayer,” recognizing our heritage of prayer and honoring the religious freedom that is treasured by our citizens. On May 5, 1988, Public Law 100-307 set aside the first Thursday of each May for this yearly observance. Three years later, the late Vonette Bright and the National Prayer Committee asked me to serve as the Chairman of the National Day of Prayer Task Force, to ensure this call to solemn assembly would be observed for generations to come. It was an assignment from God.

In September of 1991, I started the new position. I was to call the nation to prayer with only $6,000 in the bank and the help of one volunteer. I sought the Lord and was reminded that little is much if God is in it…and He was! This year marks my 25th year as the Chairman of the National Day of Prayer and as I look back over the years, it is amazing to see how the Lord has blessed and grown this ministry to our nation. We now have eight incredible National Area Leaders who lead tens of thousands of volunteers. We have had as many has 43,000 prayer gatherings on the First Thursday of May with millions united in repentance before God. The National Observance is now broadcast into 90 countries around the world and lives are being changed and hearts transformed by this growing movement of prayer.

We must not forget America’s heritage. This nation was birthed in prayer and founded on the God of the Bible…on His Biblical principles and His moral values. Unfortunately, many have turned their backs on the Creator and we are reaping the consequences. Other nations have also defied Jehovah at their peril. The Scriptures tell of one such wicked city called Nineveh where the people turned away from God and were steeped in all kinds of idolatry and immorality. God said evil had become so prevalent in the land that He determined to destroy it. He told the Prophet Jonah to go to Nineveh and warn the people and their king that destruction would fall on their city. As we all know, they repented, cried out for mercy and forgiveness and God spared them.

This is why the National Day of Prayer exists, and why I have led it for 25 years. I have longed to see America turn back to its spiritual roots. II Chronicles 7:14 tells us that “If my people, who are called by My name, will humble themselves and pray and seek My face and turn from their wicked ways, then I will hear from heaven, and I will forgive their sins and will heal their land.”

I believe in the power of prayer and I believe that God still hears the cries of His people. We desperately need His healing touch as our nation is drifting away from His righteousness and biblical teachings. Now is the time for us to be united in repentance before the God of Abraham, Isaac and Jacob, just as Nineveh did, and I believe the time has come for me to pass the baton to a leader who shares this vision with me. We need someone who will bring us before the throne of the King of kings in humility and take up the mantle in such a critical hour, so that generations to come will praise and honor the Lord. It is time to cry out to Him in desperation and we need a passionate chairman who will champion this cause without wavering.

I have been in prayer for many months, seeking whom God would anoint for that responsibility. He has answered…and called Mrs. Anne Graham Lotz to be the next Chairman of the National Day of Prayer Task Force, and she has graciously accepted. 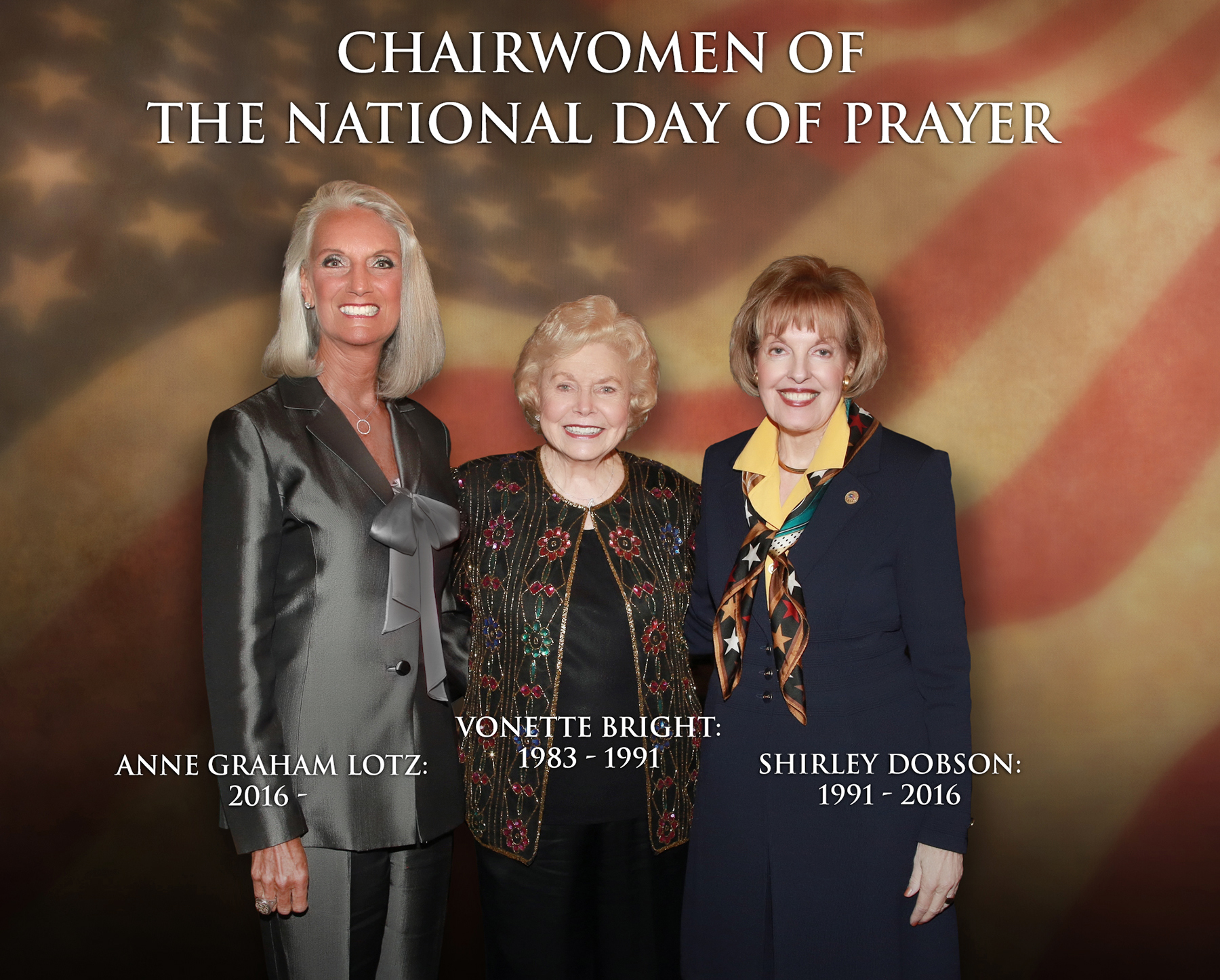 Let me share with you just a little about this incredible woman of faith. Anne Graham Lotz is called “the best preacher in the family” by her father, Billy Graham. In fact, the New York Times named Anne as one of the five most influential evangelists of her generation. She is a prayer warrior, a powerful speaker, a best-selling author of many much loved books, and the founder and president of her own organization, AnGeL Ministries. Her newest release is called, The Daniel Prayer. I can’t wait to read it.

I know that God has called the right person for such a time as this and in my new position as Chairman Emeritus, she will have my full support. I will also continue to champion the cause of prayer…America’s Greatest Hope. Join with me in congratulating Mrs. Anne Graham Lotz!

As a friend of this ministry, please know that we need your commitment and support more than ever. In the midst of change, it is tempting to pull back with a “wait and see” perspective. However, now is the time to move forward courageously with firm resolve. Will you help us continue this Legacy of Prayer in our nation? I am asking you to come alongside us as a ministry partner. Your contributions will enable us to continue to call our nation to intercession for generations to come. Thank you for standing with us.

In closing, I want to thank those of you who have stood with me over these many years – beginning with my beloved husband, Jim – my gifted vice chairman, John Bornschein – my loyal Task Force – the dedicated National Area Leaders and tireless State and Regional Coordinators – the supportive National Prayer Committee and board of directors – my great friends on the Colorado Council for the National Day of Prayer – our faithful volunteers and supporters, and the many Congressmen who have sponsored the Capitol Hill Prayer Service. They have been an incredibly effective team. It has been my privilege and honor to serve you and the body of Christ for these 25 years. May God bless you and may God bless America (Psalms 33:12)!

P.S. Look for more details on this transition in forthcoming emails and letters from our offices. It is our desire to keep you informed throughout this process.

In times of uncertainty, You are the Rock on which we stand.

We make our prayer to You using the words of the prophet Daniel:

O Lord, You are the great and awesome God, who keeps His covenant of love with those who love Him and keep His commandments. You are merciful and forgiving. You are righteous, but this day we are covered with shame because we have sinned against You, and done wrong. We have turned away from Your commands and principles. We have turned away from You.

Yet You have promised in 2 Chronicles 7, that if we--a people identified with You--would humble ourselves, pray, seek Your face, and turn from our wicked ways, then You would hear our prayer, forgive our sin and heal our land.

So we choose to stop pointing our finger at the sins of others, and examine our own hearts and lives. We choose to acknowledge our own sin--our neglect and defiance and ignorance and even rejection of You. This day we choose to repent.

In response to our heartfelt repentance, God of Abraham, Isaac and Jacob, Father of Jesus Christ, in keeping with all Your righteous acts and according to Your promise, turn away Your anger and Your wrath from the United States of America. Hear the prayers and petitions offered to You on this National Day of Prayer, as we give You our full attention. Give ear, our God, and hear; open Your eyes and see. We do not make requests of You because we are righteous, but because of Your great mercy.

For the glory of Your Name hear our prayer, forgive our sin, and heal our land.

We ask this in the name of Your Son Jesus Christ who offers us salvation from Your judgment, forgiveness for our sin, and reconciliation with You through His own blood shed on the Cross. Amen.

Called "the best preacher in the family" by her father, Billy Graham, Anne Graham Lotz speaks around the globe with the wisdom and authority of years spent 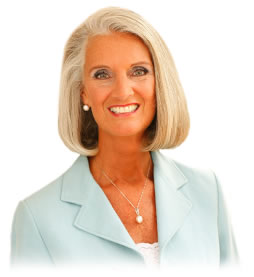 The New York Times named Anne one of the five most influential evangelists of her generation. She's been profiled on 60 Minutes, and has appeared on TV programs such as Larry King Live, The Today Show, and HannityLive. Her Just Give Me Jesus revivals have been held in more than 30 cities in 12 different countries, to hundreds of thousands of attendees.

Whether a delegate to Davos' Economic Forum, a commentator to the Washington Post, or a groundbreaking speaker on platforms throughout the world, Anne's aim is clear - to bring revival to the hearts of God's people.  And her message is consistent - calling people into a personal relationship with God through His Word.

Anne is a best-selling and award-winning author. Her most recent releases are Fixing My Eyes on Jesus, Expecting to See Jesus, Wounded by God's People and her first children's book, Heaven: God's Promise for Me.


Anne and her husband Danny Lotz have three grown children and three grandchildren.  She is the founder and president of AnGeL Ministries.