On July 18th, on the heels of our National Prayer Summit, the National Day of Prayer Task Force – Pray for America Bus Tour will take to the road once again engaging, equipping, and encouraging thousands to pray for America, by praying for the more than 21,995,000 Americans who serve in local, state, and national government. 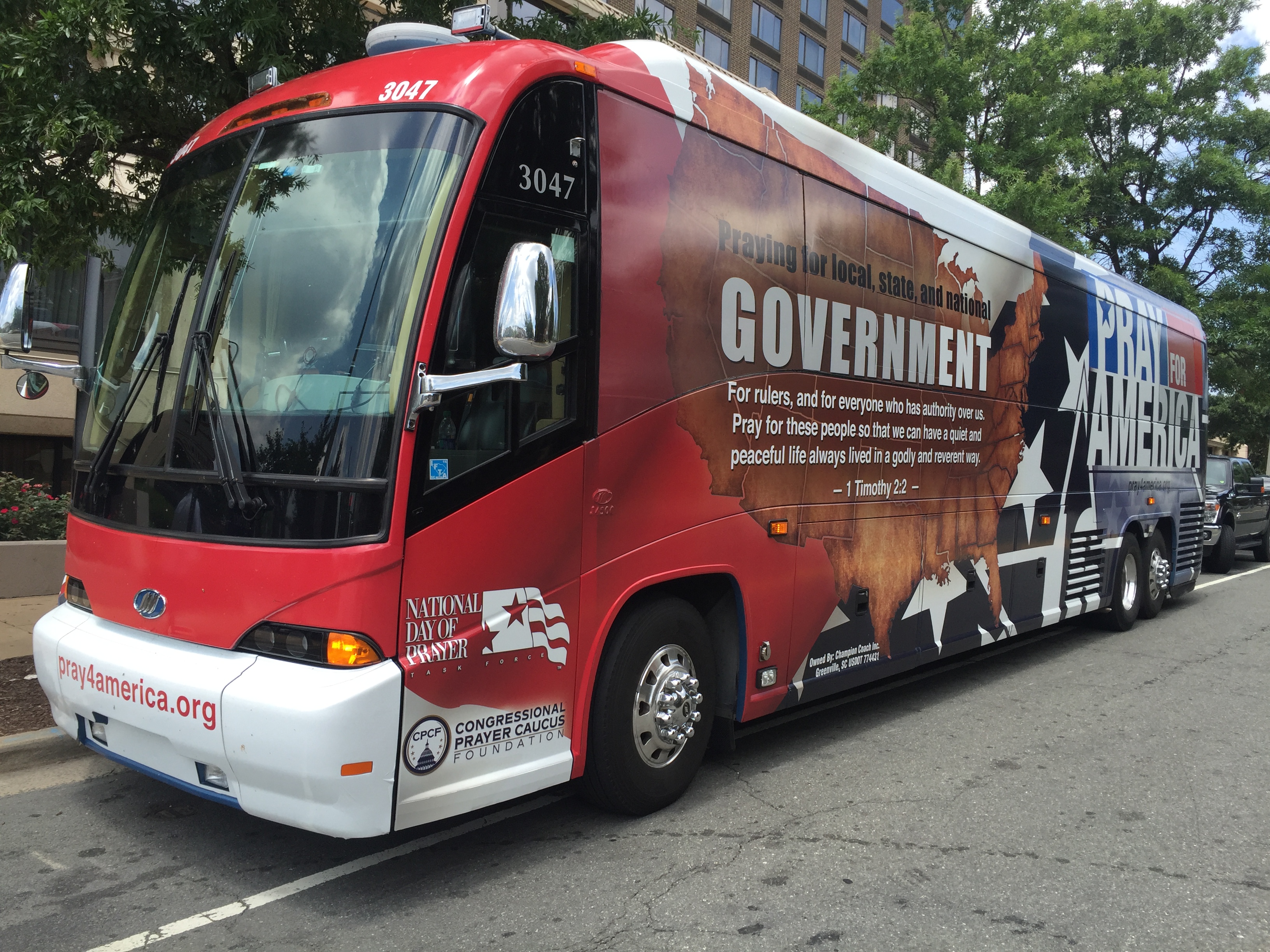 In 2013, God laid an assignment out before us to mobilize strategic, intentional, transformational prayer into seven key centers of influence in our culture. Over the past three years, the Pray for America Bus Tour has traveled to 47 states, visiting close to 600 communities, and engaging over 140,000 people in prayer for the family, the church, media and entertainment, education, business, military, and this year – government. This year is about rallying prayer for the millions of Americans that faithfully work as public servants in local, state, and national government positions, from police officers to those in political office.  In 1 Timothy 2:2, the Bible is clear, and directs every Christian to pray "for rulers, and for everyone who has authority over us. Pray for these people so that we can have a quiet and peaceful life always lived in a godly and reverent way.”  Because this is an election year, and realizing that many of these individuals serve in elected office, God has challenged us to focus much of this years tour on the upcoming national conventions. Our plan is to travel to both the Republican and Democratic National Conventions, where we will rally prayer for delegates, candidates, and all those in attendance. We will also focus on prayer for the governmental leaders in the cities that we visit.

This year, the Congressional Prayer Caucus Foundation (CPCF) will join as a co-sponsor of the tour to celebrate the 60th Anniversary of “In God We Trust” as our National Motto. The goal is engage prayer and encourage all along the way to join the 60th Anniversary Blitz to proudly display “In God We Trust” on windows, in government buildings, courtrooms, schools, and businesses all across America.  As a result of the In God We Trust.  Put it up! 60th Anniversary Blitz, over 1.3 Million window decals have been distributed, with numerous members of Congress displaying them in their offices. They are appearing on police and fire vehicles, in schools and public buildings, in countless homes and businesses, and the campaign is widely supported by hundreds of state legislators. Congressman Randy Forbes, Founder and Co-chair of the Congressional Prayer Caucus, framed it perfectly,“Throughout the more than two hundred-year history of our nation, prayer has played a vital role in strengthening the fabric of our society. The words [In God We Trust] can be ripped off all of our buildings and still, those Judeo-Christian principles are so interwoven in a tapestry of freedom and liberty, that to begin to unravel one is to unravel the other.”

On the heels of the conventions, the tour will make it’s last stop in Washington DC on July 30th to join with local and national leaders to acknowledge and celebrate the 60th anniversary of our national motto being established into law. 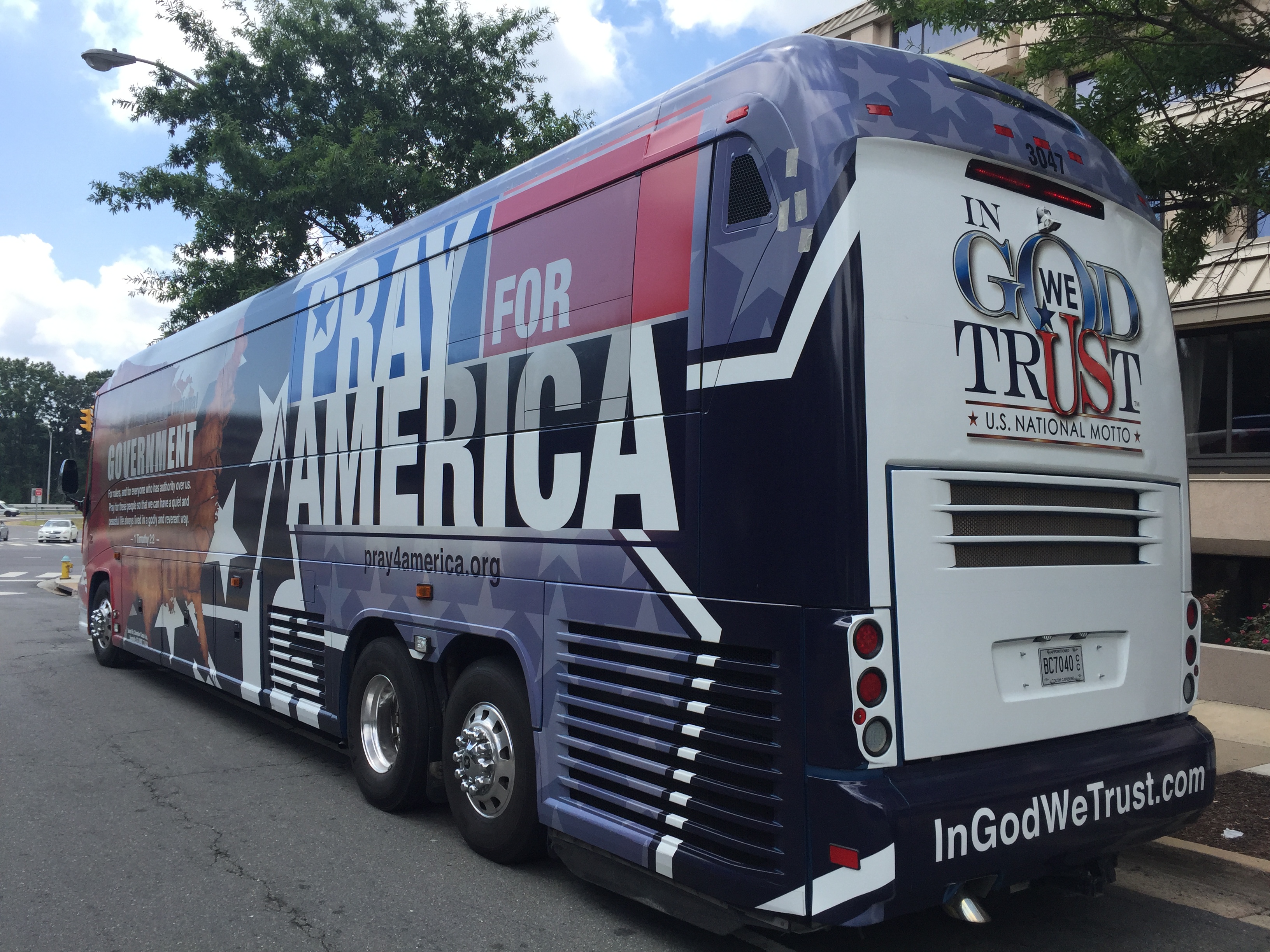 Here is where you come in. During this critical time in our nation’s history, will you commit to follow along and pray daily with us? Because of the amazing connectivity that we have through the internet and social media, you can literally follow our journey with the bus, become a partner in the tour, and pray as we chronicle this historic prayer journey. In the words of the Apostle Paul, we “Pray for these people so that we can have a quiet and peaceful life always lived in a godly and reverent way.”

To help guide you in your prayers, we will posting videos, photos, and prayer points though out each day on www.pray4america.org, and on Facebook at National Day of Prayer Task Force. You can also follow along on www.InGodWeTrust.com.

Sponsor a Mile . . . or More
You can also sponsor a mile or more by clicking here to donate, because of our matching gift challenge, every mile you give to support, we will be able to travel two!