Planes, Trains, and Prayer: Intercessors on the Move (Part Two) 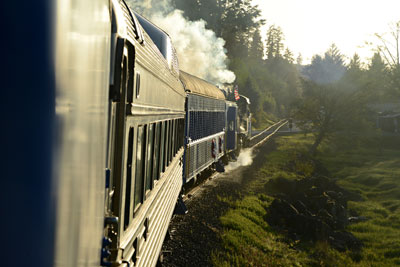 When Linda Hanratty, NDP coordinator for Tillamook County and president of Tillamook County Wide Prayer Team began planning the 2019 NDP event, she felt conflicted. She wanted an event in each of the six incorporated cities in Tillamook County, but she did not want to give up the unity of hosting people from all over the large, rural county in one place.

God directed Hanratty’s heart through an ordinary circumstance: a phone call asking about a venue.

And thus, what became the Sunset Prayer Train through Tillamook County was born.

The Sunset Prayer Train lasted roughly four and a half hours on the evening of the National Day of Prayer as the train full of intercessors and city leaders from across the county, travelled from one end of the county to the other and back again. While the train was northbound the first half of the trip, intercessors focused their prayers on the specific needs of local communities and leaders, then shifted to praying for Oregon and the United States while heading south on the return trip.

As the train passed through the towns along the railroad, leaders of those towns were invited to the front of their train car to be prayed over while intercessors from each community lifted up fervent prayers for specific needs in their area.

Janiece Struloeff served as an MC on a car with many of the city leaders, and was struck by the love believers showed to them, regardless of their political affiliation or location.

“Even when they were walking back to their seats, people were encouraging them and asking what their needs were, saying that they [the leaders] were called to their positions and that they were loved and supported,” said Struloeff. “When they left, they were my friends. They hugged me and said, ‘We hope we can do this again next year.’”

Organizers were surprised at the number of city officials who participated, and learned through conversations that they felt discouraged in their jobs from constant negative feedback or the added pressures on their families while they shouldered responsibilities in the community.

“We didn’t know where they were with God, but I saw that they came empty and left full, and were totally blessed, ”Struloeff said. “I know they felt loved and cared for and supported."

The Spirit of the Lord did not just spontaneously show up with the group—the Author of our days was present in the planning, providing divine inspiration every step of the way.

NDP landed in the middle of a 50-day prayer event for the Tillamook County Wide Prayer team, so intercessors from all over the county had been intently seeking the Lord and fervently praying in preparation for the event.

After the initial prompting from the Lord to hold the event on a train, Linda Hanratty immediately thought of a friend who owns a historic train with the Oregon Coast Scenic Railroad. She called her friend and laid out her idea to hold the prayer event on a train, wondering even as she was asking, how NDP and the county prayer team would afford such a venue. 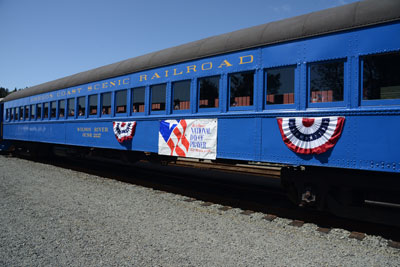 Where God leads doors will be opened, and Hanratty was met with resounding approval and excitement. The board of the Oregon Coast Scenic Railroad ensured Hanratty they would adjust the price to make the event affordable, even going so far as to offer all three passenger train cars, a baggage car to serve as a kitchen area, and a converted train station as an event venue.

“The members of the railroad aren’t necessarily Christians, and for them to come aboard and to say you can use our venue and train—that was the hand of the Lord! It made everyone marvel and say ‘wow!’”, said Joyce Seeley, a journalist from nearby Corvallis, whom the prayer team affectionately claims to have “adopted.”

Leading up to the Prayer Train, members of the Tillamook County Wide Prayer Team attended city council meetings in all six incorporated towns in the county to formally invite the city council members, mayors and city planners to ride along and receive prayer and for them personally, and for the communities they serve.

“Everybody just caught the vision as a fun activity as well as a great prayer opportunity,” said Hanratty.

Adults were the primary participants, and youth from a local church baked goodies for people to enjoy during the Sunset Prayer Train and served them throughout the ride.

Sessions of prayer and exhortation were interspersed with live worship. Bob and Caroline Brown, members of the Tillamook County Wide Worship Team led songs on each of the train cars, playing twice in each car by the time the train rolled to the final stop.

“It was really fun to see the people enjoying themselves, clapping, laughing and singing,” Caroline Brown said.

During the train ride, participants passed around “God Cans” to each table or section of seats. The God Cans were tin cans filled with notecards containing specific prayers for the community with each card having data from government sources or reliable nonprofits on topics like suicides and test scores in the school system. There were also sample prayers and scriptures to help guide the prayer time as well.

“I want to ignite intercession for all believers and get tools for the ones who don’t know how to pray,” Hanratty said. “They can just read the cards! And for those who do know how to pray, they can use the cards as a catalyst for a whole new realm of joy.”

Inside the God Cans city leaders could add prayer requests specific to them or their city, and intercessors would lift those up before the Lord as well.

“The love you felt on this train was just a different experience than having a meeting in a room over coffee,” said Joyce Seeley.

Moving through the county and being in unity with fellow believers made the Sunset Prayer Train a powerful and unique experience – and the Spirit of the Lord kept moving well after the event ended.

“Every single person was filled with joy. This is a major outcome, because joy is spreading from the train and to whomever they [the participants] talked to,” said Pam Neighbor who assists the state NDP coordinator. “Christians and non-Christians get the sense that God’s people can get together, be filled with love and peace, and make His body known as something inviting and wonderful to be involved with. That is a great and wonderful fruit, and it is spreading throughout our state and beyond.”

Even just a few weeks after the event the Tillamook County Wide Prayer team is already seeing results in the community of their prayers and budding joy. Since, they have formed a relationship with city leaders, and a local housing authority contacted Linda Hanratty for the prayer team to come and pray for them.

While it seems an impossibility for government officials to ask for prayer in a day and age where the separation of church and state is so prominent an issue ... for a group with limited funding to rent out a historic event venue ... and for so many believers from various churches to gather and pray in unity - with God, all things are possible! The Tillamook County Wide Prayer team submitted themselves to the Lord’s will and saw a mighty work done in their county, and they are continuing to carry the work forward.

“I’m hoping humanity enters and that we are engaging in the relationships with the people we are praying for,” Hanratty said. “I really feel like we have just hit the tip of the iceberg with how prayer can change our county and state. Intercession is not a thing for a few people, it’s a gift from God to all believers.”