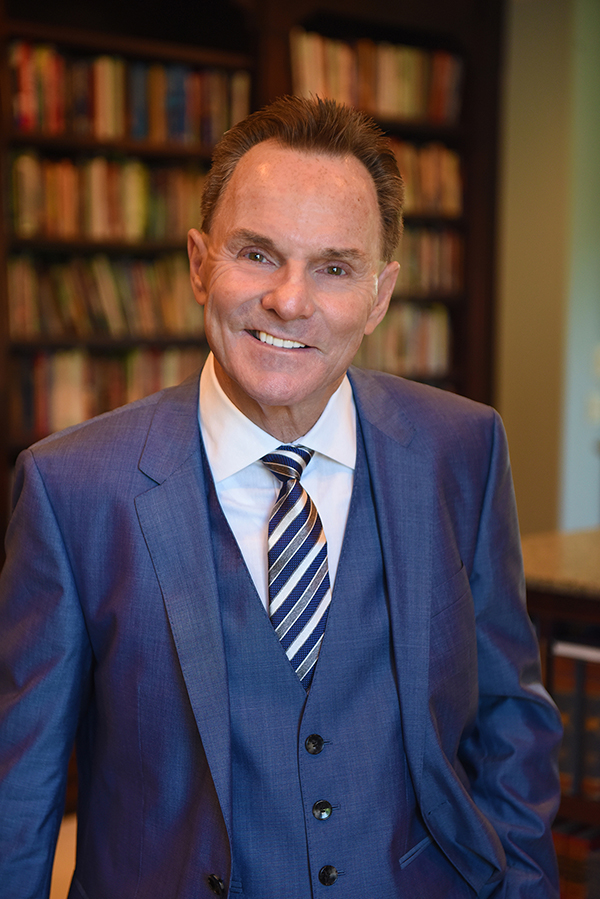 As we step into this new phase of carrying on this mission and legacy, we believe that we couldn’t have found a man more passionate or dedicated to prayer and spiritual awakening than Ronnie Floyd. Throughout his life he has demonstrated that he is a leader with a unique calling to unify others to pray for our nation and its spiritual awakening.

We will never know on this side of heaven how many lives have been impacted by this powerful movement of prayer. We are grateful for leaders like Vonette Bright and Shirley Dobson, who provided leadership for decades, and Anne Graham Lotz, who provided leadership in a major time of transition in our ministry. We are confident that Dr. Floyd will build on their legacy, and lead us forward in these turbulent times to become a movement of prayer that goes far beyond a day in May. Never before has our nation needed prayer like we do today, and the need for National Day of Prayer in our nation has never been greater.

Please keep Dr. Floyd in your prayers as he assumes this important leadership role and continues his vital ministry as Senior Pastor at Cross Church in northwest Arkansas. Also, pray for our NDP staff and Board as we move together under Dr. Floyd’s leadership into a new day for prayer in our nation.

Take a moment to read and share the following press release. You can also click on this link to read Dr. Floyd’s article, While Staying at Cross Church as Senior Pastor I am Becoming the President of the National Day of Prayer. Also follow Dr. Floyd at www.ronniefloyd.com.

Dr. Floyd to bring decades of experience and passion for prayer, spiritual awakening, and reaching the world for Christ to the National Day of Prayer. He will remain senior pastor of Cross Church in Springdale, Arkansas.

The National Day of Prayer was created in 1952 by a joint resolution of Congress, and signed into law by President Harry S. Truman. In 1988, the law was unanimously amended by both the House and the Senate and signed into law by President Ronald Reagan on Thursday, May 5, 1988, designating the first Thursday of May as a day of national prayer. Every president since 1952 has signed a National Day of Prayer proclamation.

“Without a shadow of a doubt, prayer has always been at the heart of our nation’s founding and history,” said David Butts, chairman of the board of the National Day of Prayer and founder and president of Harvest Prayer Ministries. “The mission of the National Day of Prayer is to mobilize our nation to unified public prayer for America. Our heart is to see a mighty spiritual awakening in America.”

"As we step into a new phase of carrying this mission and legacy, I believe we couldn’t have found a man more passionate or dedicated to prayer and spiritual awakening than Ronnie Floyd," Butts said. "Throughout his life, he has demonstrated he is a leader with a unique calling to lead others to unify together to pray for our nation and the need of spiritual awakening. America is blessed to have him as the new president of the National Day of Prayer.”

Other members of the National Day of Prayer’s board of directors also expressed their support for Dr. Floyd.

“Ronnie Floyd is one of the great Christian leaders in America. I believe he has been uniquely prepared and called by God to give leadership to the National Day of Prayer at this important time,” said Paul Cedar, chairman and CEO of Mission America Coalition

“Dr. Ronnie Floyd has a heart that beats for the very things that mirror the heartbeat of God,” said Dick Eastman, international president of Every Home For Christ. “He radiates a passion for a great Christ Awakening in our nation born out of a sweeping revival of the Church in America unlike ever before.”

Dr. Floyd, in a letter to his congregation announcing his new role as president of the National Day of Prayer, said, “In this desperate and urgent hour when turmoil and division is evident in America and security threats are being made against America, it is imperative that we do all we can right now to mobilize unified public prayer for America.”

"America’s greatest need today is to experience the next Great Spiritual Awakening, [and] we know that no great movement of God ever occurs that is not preceded by the extraordinary prayer of God’s people," wrote Dr. Floyd. "The National Day of Prayer mobilizes unified public prayer for America."

Dr. Floyd requested his congregation to pray for him daily as he leads the National Day of Prayer and expressed hope in the future of the movement. "God can do more in a moment than we can do in a lifetime," he wrote.

As part of his vision as new president, Dr. Floyd sees the National Day of Prayer becoming a larger multi-denominational, -ethnic, -lingual and -generational movement. He also believes the National Day of Prayer can become America's leading provider of prayer resources and strategies, engaging Americans daily via the digital world. Dr. Floyd's life mission is to help usher America's next Great Spiritual Awakening, with prayer being the driving catalyst of this spiritual movement.

Dr. Floyd, who brings decades of expertise and passion for revival and awakening to the National Day of Prayer, has a long history of leading prayer movements in America.

He was a prominent figure in the Promise Keepers movement of the 1990s and spoke at the organization’s 1997 event “Stand in the Gap,” where an estimated 1.4 million people filled Washington, D.C.’s National Mall. The event is still considered one of the largest religious gatherings in American history.

In June 2014, Dr. Floyd also carried his passion for prayer, revival, and spiritual awakening when he was elected president of the Southern Baptist Convention (SBC), America’s largest Protestant denomination. In his two-term tenure as president of the convention, Dr. Floyd led Southern Baptists to focus on prayer, evangelism, racial unity, repentance, and calling out to God for the next Great Spiritual Awakening. In one of the most striking moments of the 2016 SBC Convention, Dr. Floyd and Dr. Jerry Young, president of the National Baptist Convention, led a panel titled “A National Conversation on Racial Unity in America.” This historic event in Southern Baptist history was recognized by national media and sparked conversations of healing and unity within the movement.

Dr. Floyd has pastored the Cross Church congregation since 1986. Today, Cross Church has a membership of over 20,000, making it the largest church in the state of Arkansas and one of the largest in America.

A photograph of Dr. Floyd is available for download here.

Dr. Ronnie Floyd is the senior pastor of Cross Church and president of the National Day of Prayer, which each year mobilizes millions of Americans to unified public prayer for the United States of America. He’s the immediate past president of the Southern Baptist Convention. Follow him on Twitter @ronniefloyd.

The National Day of Prayer was created in 1952 by a joint resolution of Congress, and signed into law by President Harry S. Truman. In 1988, the law was unanimously amended by both the House and the Senate. President Ronald Reagan signed the amended law into effect on Thursday, May 5, 1988, designating the first Thursday of May as a day of national prayer. Every year, millions of Americans, in tens of thousands of meetings across all 50 states, come together for unified public prayer for America. Dr. Ronnie Floyd is the president of the National Day of Prayer.