For a first-generation American, our freedoms have a special importance and create a strong love for our country.

This is the same love for our country within Gina Gibson, the National Area Leader (NAL) for the mountain states alongside her husband, Stan. The Gibsons serve Arizona, New Mexico, Colorado, Utah, Montana and their home state of Wyoming.

“No matter how difficult things are, America is still the best country because of freedom,” said Gina, whose father immigrated to the United States after World War II. “I’m burdened by all the strife and division in our country, but God has told me not to give up praying for our nation.”

Gina has dedicated over twenty years of her life to praying for America alongside NDP and other organizations. She began her journey as an event coordinator with her local church in southeast Wyoming and taking other leadership positions though the years. She was eventually commissioned as the Wyoming State Coordinator and then the mountain states NAL in 2012 with Stan. The Gibsons serve as both Wyoming State Coordinators and NAL until the Lord brings a new state coordinator, and they love the people that they have the opportunity to serve.

“The mountain states are the backbone of America,” Gina said.“We are that kind of salt of the earth people, and we believe because of that we have something we can give back to the nation—we can pray that there would be a spiritual awakening.”

Over the past few years, the mountain states coordinators have been specifically praying for opportunities to get into the offices of elected officials to pray with them. The mighty hand of the Lord has opened these doors all throughout the region, all the way up to a governor’s office! Gina Gibson leads by example, charging forward into these open doors. By the power of God, persistent prayer, and a humble presence, Gina has formed a relationship with the governor of Wyoming, Mark Gordon. Because of the relationship, she can set up an appointment almost any time to meet and pray for him. He has even shown up at prayer events and participated in prayer! 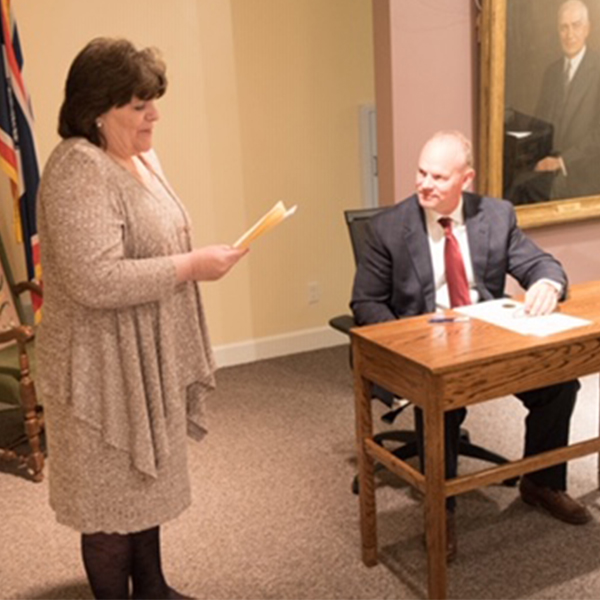 We come with no agenda, just a heart to pray, and that is what opens doors,”Gina said.

As National Area Leader, Gina is responsible for communicating ideas and information from the NDP Task Force headquarters in Colorado out to state coordinators. She hosts monthly conference calls with the state leaders in her area to discuss issues, pray for each other, share ideas for events and celebrate each other’s successes. Through years of Gina bringing them together, these leaders have built a strong family bond. They regularly stay in contact with each other outside of the monthly calls through text messages and emails, asking for prayer and rejoicing in God’s faithfulness together for prayers that He has answered.

Recently, Gina has been given the added charge of serving as the Prayer Ambassador for Children, because of her heart for sharing Christ with kids. In the coming months, she is looking to begin a pilot program called Children in Prayer for America to mobilize children to pray. She sees a hunger and a thirst for God in both her eight grandchildren and the hundreds of children she has served throughout her years as a children’s minister.

“I want to mobilize children and allow them to have a voice in what we do to pray,” Gina said.“I’m finding out asI minister to children that they have great ideas, and we miss it because we tell them and we do not ask them.”

The pilot program will gear up in her hometown of Laramie in conjunction with the start of the new school year. This is the first stepping stone toward Gina’s vision is of seeing children’s hearts captivated by the Lord and on fire to pray for the leaders in their country.

Outside of their responsibilities with NDP, Gina and Stan are involved in a mission organization in Belize, where the Gibsons have travelled over 30 times since the late 90’s to help build homes and host programs for children. In addition to that ministry, Gina serves as the children’s minister at their church and hosts a prayer room adjacent to the NDP office in her hometown of Laramie, called the Lighthouse of Prayer. Throughout the day people stop by asking for prayer or want to use the space as a place to pray on their own.

Stan is a retired firefighter, and now works part-time at the Laramie Plains Museum.

“Stan loves to finance kingdom work,”Gina said. “So much of what I do is because he works hard so we can have finances to do that.”

Stan does not seek a spotlight; he prefers to be in the background, serving our Father who sees in secret. Gina is often the face of leadership at the front of a group or on a stage, and Stan’s support behind the scenes is integral to their success as a couple united on mission for Christ. He is always praying for her when she speaks and is the first person to give her a hug when she comes off stage.

The Gibsons have seen God move in powerful ways through their time as leaders. This year, the National Day of Prayer event was allowed on the front steps of the Colorado state capitol building in Denver, where Gina brought the opening prayer. They saw God move in Wyoming as well, where the Lord rained down blessing in the form of communication resources.

“The state [Wyoming] allowed our NDP event to be live streamed around the state, and they did it for us,” Gina said.“I was just in awe that when you’re faithful, you look for God and you find Him.”

Even though the mountain states are some of the most sparsely populated places in our country, the Lord is still on the move and still at work, and Gina and Stan Gibson are honored to be stewards of the work that God is doing there.

“His master replied, ‘Well done, good and faithful servant! You have been faithful with a few things; I will put you in charge of many things. Come and share your master’s happiness!’”

Gina and Stan have seen an outpouring of positive responses from elected officials by simply introducing themselves and asking these leaders how they can pray for them. This genuine and sincere engagement will go a long way with the Lord's blessing.

In your community, this might look like choosing one local official to pray with, or it could mean reaching out to your national representatives. As you move out and engage the people you are praying for, being the hands and feet of Christ, you will experience God's blessings!

As we find more ways to love one another, remember the duality of Paul’s message in Romans 12:9 “Love must be sincere. Hate what is evil; cling to good.” This is a reflection of Jesus, who listened, met needs and shared the good news of reconciliation with God, even though His very being was diametrically opposed to the sin around Him. Just as a doctor provides sincere care for ill patients, so too should we approach lawmakers and leaders we disagree with—engaging them by showing a genuine concern for their needs and praying for their salvation.

As we reach out to leaders in sincere love, people will respond to someone who comes, as Stan and Gina Gibson do, with no agenda and a pure heart to serve.