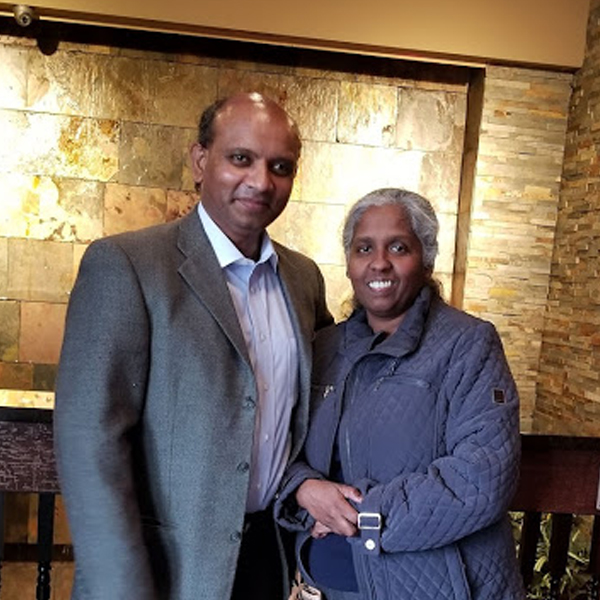 God is still a God of miracles, even in our modern day. It may not be walking on water, but it might be the provision to meet a need, being healed, or an open door for kingdom work that is just as grand and glorious. Angelo Rajadurai, the new Massachusetts state coordinator, and his wife, Danita, have seen God do all three in different seasons in their lives. They are praying for continued favor from the Lord as they step into their new leadership position in their state.

After attending the National Day of Prayer and other prayer events in Rhode Island, God moved in both Angelo and Danita’s hearts. “I felt convicted, that every church should be involved—I was grieved in my heart that many churches didn’t have an event,” Danita said. The conviction of the Holy Spirit moved the Rajadurais into greater obedience as God opened their eyes to a need. In the past two years, the couple has functioned as local coordinators by planning events for the National Day of Prayer for local churches to gather together and pray. Their first year they saw roughly four churches participate and last year the Lord increased their number to eight!

Before Angelo came on board, the Massachusetts state coordinator position was vacant. The other leaders in the area, along with the National Area Leader, Mary Bruce, had been praying for God to raise up a new state coordinator. Just a few weeks after a specific prayer time for a new state leader God brought Angelo’s name to their attention. His new leadership is an answer to prayer, and an open door for more ministry in one of America’s first states! When Angelo heard about the opening, he approached his pastor about it and his pastor encouraged him to take the position - despite Angelo’s misgivings that he was inadequate for the role. He and Danita prayed about the decision, and felt God leading them to rise to the occasion and move through this newly opened door to help mobilize prayer in their state.

Even in the years leading up to their appointment, the Lord was preparing Angelo and paving the way the for him to serve in this ministry position. Three years ago, Angelo went through a season of sickness, where the Lord led he and Danita to devote themselves to prayer and the scriptures in Psalm 119 about praising the Lord in all the days of life. Even as he grew weaker, Angelo proclaimed God’s glory over his life. Six months into their journey in prayer, Angelo fell into a coma while on a business trip in San Francisco. Danita and their eldest son flew from their home outside of Boston all the way to California to be at Angelo’s bedside. While she could have been terrified and distraught, as any wife would understandably be with her husband and breadwinner on the brink of death, Danita was at peace. She shared that she had no fear, no doubts, nothing, because she had saturated her soul with prayer for the past six months. The Lord told Danita that Angelo would not die, and she believed His promise.  “The consolation Danita had was the consolation of the power of God, even though doctors had been saying I might not wake up,” Angelo said. By the grace of God, Angelo survived the ordeal, and he remembers Jesus visiting him every night he was in the coma. God is still active in healing both our minds and our bodies! It was not time for the Lord to call Angelo home, because God still had plans to use him on this side of heaven.

The Rajadurais are also familiar with God’s voice of direction. When they were preparing to buy a new house the timing seemed wrong, and all their peers were counseling them not to buy. However, God had different plans. “God said so clearly, ‘This is the house, this is how much you pay’—everything we heard from God,” Angelo said. “Even for physical things, God has clearly led us through prayer.” At the beginning of the year, Danita felt that her prayer life was lacking in some way, so she began asking God to give her a spirit of intercession. At a women’s retreat, she was spending time in prayer and felt the Lord saying “You’ve asked me to give a spirit of intercession, and I will pour it out on you, and My spirit will be made perfect in you, in your weakness.” Since that outpouring of the Holy Spirit, Danita has seen her prayer life grow and deepen, and still hungers for more of the Lord and even greater prayers.

The Rajadurais are a couple united in prayer, journeying alongside each other as they both walk with Christ. They know how to serve together and separately. They have both felt God’s voice calling them to serve the body of Christ through mobilizing prayer, and NDP was the perfect opportunity for the couple to grow their obedience to the Great Commission.

“Massachusetts is where everything in U.S. started, with freedom of religion and liberties. They trusted God with everything, and God is calling us back to do that,” Angelo said.

The Lord has given Angelo a vision to see every church meeting with other churches to pray for their communities in addition to churches gathering on the annual National Day of Prayer. He has already seen positive responses over the past two years contacting churches from all denominations to pray, and is expectant of the unity God will bring to Massachusetts in the coming years. “It was amazing to go and find people who are so happy to come and pray. Our job is to bring these people together and pray as a group,” Angelo said. “When you bring a lot of little flames together, it becomes a big fire.” Pray for Angelo and Danita Rajadurai as they submit themselves, their family and their ministry to the Lord -- and pray expectantly for God to ignite prayer and unity throughout the churches in their home state.

“But He said to me, ‘My grace is sufficient for you, for my power is made perfect in weakness.’ Therefore, I will boast all the more gladly about my weaknesses, so that Christ’s power may rest on me.” – 2 Corinthians 12:9