Inspiration from Decades of Prayer in the Midwest 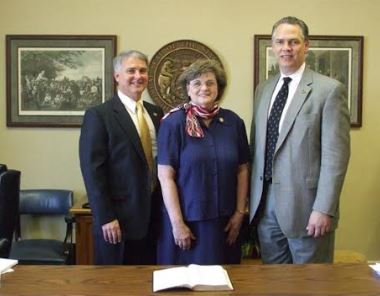 Ask anyone you pass throughout the day—the cashier at the grocery store, a coworker or a neighbor—if our country is divided, and you will most likely, hear a resounding ‘yes’! Regardless of their political affiliation or social strata, these divisions are deeply felt in our society, driving wedges between communities, churches and families. Looking back in history, America has endured seasons of division during times such as the tumultuous 1960’s, reaching back as far as the Civil War, and then beyond that to our Revolutionary War. Throughout these times, the Lord has equipped men and women to stand in the gap between heaven and our hurting world and pray for God’s kingdom to come on Earth.

One woman standing in the gap today, is our own Midwest National Area Leader, Sue Stoltz. Sue has been involved with National Day of Prayer since 1989, and her leadership influence extends over Kansas, Oklahoma, Michigan, Missouri, Illinois, and Indiana. She has spent decades feeling God burden her heart to pray for our government and elected officials.

“I believe our nation is a great nation worth praying for, and I take it very seriously.”

She says that this call to serve the country in prayer “runs in the blood.”, as generations prior, her great-great grandfather, Bishop Thomas Bowman, served as the chaplain to the U.S. Senate during Abraham Lincoln’s term as president, most likely feeling the same burden in the face of a shattered country. As Sue sees it, she has inherited a divine burden to pray for the Lord to lead our elected officials.

“The minute I heard of the National Day of Prayer as a designated day, I didn’t even take a second breath and I was working out details to get something together for our city,” Sue said.

The first time that she heard of the National Day of Prayer was in 1988, and she immediately reached out and contacted the mayor for a prayer proclamation and the city ministerial alliance for prayer support. Her efforts culminated in an hour-long prayer time on the National Day of Prayer with elected and spiritual leaders, all praying for their city and nation. That became the first of many events that Sue has been personally involved in coordinating over the last 30 years. Her immediate response of immediate action and reaching out, has become a hallmark of her efforts, and one that we can all learn from.

Another example of immediate action, reaching out, engaging leaders, and seeing an impact, was during a 2010 initiative to mobilize prayer in Missouri to lift up the state congress while they worked to pass a balanced budget. After years of going office to office laying a groundwork of love by offering prayer, both houses and both party leaders approached a Christian lobbyist asking for non-partisan prayer. Legislators faced the task of passing a balanced budget, saying they needed a miracle to do so.  Sue took that as a challenge and reached out to her network for dedicated, non-partisan, Gospel-centered prayer. “We had been praying for them for a long time, but this was the first time they had actually approached us and asked for prayer.” She said.

Sue proposed 40 days of fasting and prayer, interceding before the Lord and asking for cooperation and holy intentions in the hearts of all the Missouri state legislators. People all over the state committed to pray and fast. Eight days before the budget was due, Stoltz visited the chambers where they reported to her that God had indeed answered the prayers of the people—legislators passed the budget early with both parties working together. They gave God glory for the comradery lawmakers from both sides of the aisle experienced during the session!

God’s movement has not been confined to her home state of Missouri. In Kansas, she has helped state and local leaders mobilize what they called “Operation Rolling Thunder”, an effort to see churches from all denominations commit to praying for the seven mountains for 40 days. Prayer leaders asked leaders in their local government and school system about their needs, so they could pray for them. Throughout that 40 days, leaders tracked data, such as local crime rates, and they began to see clear evidence of their prayers at work! Marriages were healed, crime decreased, and their community was touched. The effective, fervent prayers of the faithful are changing their communities around them, and the Lord is at work in miraculous and mighty ways.

“A revival is proceeded by prayer—always. He wants us to call upon Him and ask Him,”

The Lord has used Sue’s dedication to the disciplines of fasting and praying to shape and strengthen her faith, calling her deeper into obedience and revealing more of the richness of His glory along the way. For years she has fasted one day each week, using that time to pour her heart out to God and listening for His words that fill her heart and move her to action.

“It is comforting to know it is not by my works, but it’s truly by my faith that He has given me that open line to be able to talk back and forth, and to hear Him, and also to speak to Him,”

As of the end of June, Sue retired from her career with Missouri-based Bott Radio Network. For many years she was able to use her platform as a radio host to talk to Christian leaders and encourage believers to lift up their leaders in prayer.  “I feel that I’m better on my knees somewhere in the background, but God always tells me to be places, to get up and sometimes be on stage with a mic,” Stoltz said. “And that’s okay, because I’ve learned to lean on God for the words and the desires to put into actions that would make a difference for our nation and state.”

But leaving BRN doesn’t mean that she’s retired from prayer or NDP! Sue is determined to continue serving the Lord and pouring out to others with every bit of energy and every moment she has left on this side of Heaven.  In fact, just this week, in Missouri, she hosted a regional summit for her group of state coordinators, where they each shared their experiences and prayer needs for each state – and then prayed for one another – each being an inspiration for the other.

Sue and our other leaders like her, represent what is one of the main strengths of the NDP Task Force network of coordinators. As they reach out to their town, city, county or state leaders and influencers, and begin to pray – amazing things happen! And as amazing things happen, God gives them testimonies of what He did to share with others, which in turn encourages and spurs them on to reach out and pray – and then amazing things begin to happen there!

Let's all follow this example! See the need, take immediate action, reach out, engage leaders, and wait to see the impact!

“I have perceived that there is nothing better for them than to be joyful and do what is good as long as they live.” -Ecclesiastes 3:12