God is on the Move Throughout the Nation 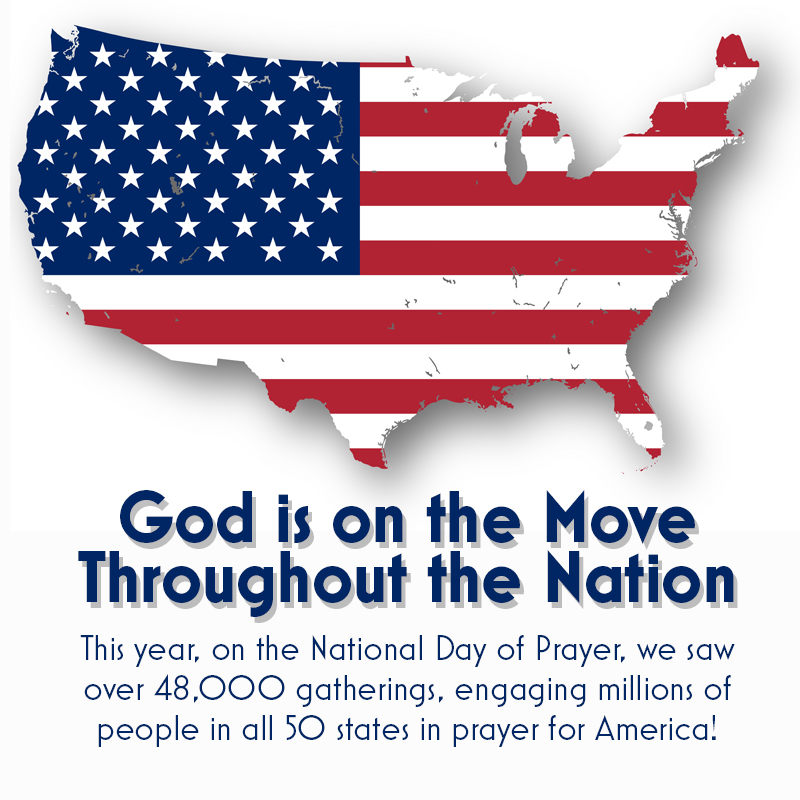 Because you are a friend of the National Day of Prayer Task Force, I am writing to share several updates from the front lines. It is my intent that after reading this, you will be encouraged that God is on the move throughout the nation!

On May 5th, the President of the United States and all 50 Governors proclaimed the 65th annual National Day of Prayer as millions of Americans gathered from coast to coast in solemn assembly. It was quite possibly the largest mobilized effort of prayer in the history of our nation with more than 48,000 events taking place at courthouse steps, parks, offices, government buildings, churches and homes symbolizing a single prayer – one voice – one cry – for such a time as this. It was, perhaps, the fulfillment of the vision of President John Adams, who wrote on June 17, 1775, “We have appointed a Continental fast. Millions will be upon their knees at once before their great Creator, imploring his forgiveness and blessing; his smiles on American councils and arms.”

Americans everywhere paused to intercede for our nation. Stadiums were filled from Pennsylvania to Minnesota with shouts of prayer and adoration. Parades, motorcycle rallies, hot air balloon launches and more were planned in celebration. In addition to the enthusiasm generated by reports from around the country, we were pleased that for the first time, the Korean church mobilized more than 4,000 churches to pray for our nation. Also, the National Observance was broadcast live from Jerusalem, Israel, to over 90 countries with 450,000 viewers tuning in online and through satellite television.

In Washington D.C., standing room only events gave transparency to the move of the Holy Spirit to unite the church for what appears to be the sparking embers of a global revival. Honorary Chairman, Dr. Tony Evans, brought the keynote address, calling for repentance across the land. Among the other esteemed speakers were: Congressman Louie Gohmert, Congressman Robert Aderholt, Chaplain Barry Black, Judge Glenn Murdock, Dr. James and Shirley Dobson and Brigadier General Chris McPadden. Our musical guests, Veritas, punctuated the time with praise and worship. It was truly a historic and momentous gathering we will be talking about for generations to come. If you were unable to join with us at the National Observance, simply visit our website, www.NationalDayofPrayer.org, and you will find a link to listen or view all of the speakers. It will give you a unique glimpse of what transpired.

The morning began promptly at 9:00 a.m. eastern with the presentation of the colors by the Joint Armed Forces Color Guard and the National Anthem. Mrs. Shirley Dobson, Chairman of the National Day of Prayer Task Force, kicked off the momentous celebration with a warm greeting and introduction of Rabbi Jonathan Cahn. She then had everyone on the edge of their seats when she made the following statement:

“In 1988, the late Vonette Bright began petitioning Members of Congress to support a bill that would designate the first Thursday in May as the annual National Day of Prayer. By a joint resolution of the United States Congress, it was signed into law by President Reagan on May 8th of that year. Mrs. Bright continued in leadership until 1991. Then she and the National Prayer Committee asked me to succeed her as chairman of the National Day of Prayer Task Force. After much prayer and careful consideration, I accepted the responsibility and have now served for 25 consecutive years. The Day of Prayer has been observed by more than 33 million people at 630,000 prayer gatherings around the world…and today, another chapter begins.

I am pleased to announce that Mrs. Anne Graham Lotz, daughter of Dr. Billy Graham, will succeed me as the new chairman of the National Day of Prayer Task Force. It is imperative that we preserve this American heritage to ensure that this powerful expression of our religious freedom will continue for generations to come. I couldn’t be more grateful that the Lord has laid upon Anne the mantle of leadership for national prayer. She is eminently qualified to serve the nation in this capacity. We honor her for accepting this responsibility.”

Immediately, the audience was surprised and yet greatly encouraged by the announcement. A new chapter begins after a quarter century as the mantle of leadership passes to Billy Graham’s daughter. This transition of leadership seems fitting given the fact that it was in 1952 when House Speaker Sam Rayburn invited the Reverend Billy Graham to Washington D.C. and on the steps of the Capitol in February of that year, he delivered a message at the young age of 32 that transformed a city and ultimately a nation. As a result, a bill calling for an annual National Day of Prayer, co-sponsored by Percy Priest and Senator Frank Carlson, and publicly endorsed by Conrad Hilton (who took out a full page ad of Uncle Sam on his knees in prayer) was passed through Congress and then signed by President Harry Truman. The bill was passed April 17, 1952.

Many will look to the headlines to see if there is instant change in America as a result of this day of prayer, and what we must remember is that God will respond in His timing. Our prayers will not go unanswered. Like the disciples who waited for the promise of Christ to be fulfilled on Pentecost, we must be patient and remain mobilized and confident that the prayers of His people are powerful and effective and generations not yet born will praise the Lord (Psalm 102:18).

In closing, I want to remind you that although the official 65th annual National Day of Prayer has concluded, we must work diligently, together, to make every day a national day of prayer! On July 14-17, we will be calling on God’s people to join us in Washington D.C. for a National Prayer Summit to unite as one voice before God’s throne on behalf of the United States of America. This special event will be the first address from our new Chairman, Mrs. Anne Graham Lotz, and will include other speakers like Dutch Sheets, Bishop Harry Jackson, Dr. David Butts, Jason Hershey and many others. There will also be an organized prayer walk around the city through the newly commissioned American Center for Prayer and Revival, as well as a gathering of tens of thousands of people on the National Mall featuring speakers like Francis Chan, Ravi Zacharias, Josh McDowell, Luis Palau and more. The momentum continues after the Summit as we are launching our Pray for America Bus Rally Tour IV, July 18-30, to rally prayer at both national party conventions as we seek God’s intervention in our nation’s government. You can follow along with these events at www.NationalDayofPrayer.org.

Through your unwavering intercession and financial partnership, and by God’s great mercy, we have accomplished much – but I am convinced there is still more we can do that will have an eternal impact on our neighbors, cities, states and country. A gift match challenge has been presented to our ministry and we need your help. For every dollar we receive between now and the end of the challenge, a ministry partner will match your gift, thereby doubling your contribution to the National Day of Prayer Task Force. So for this limited time, your sacrificial gift will double the impact. Our efforts to defend religious freedoms, train and equip thousands of volunteers, organize year-around prayer gatherings and mobilize millions to pray on the annual National Day of Prayer take a combined effort from all of us. Together we can do more. Thank you for your prayers and financial support that enable us to keep moving forward.

May God bless America once more!

Click to Give to the National Day of Prayer Task Force 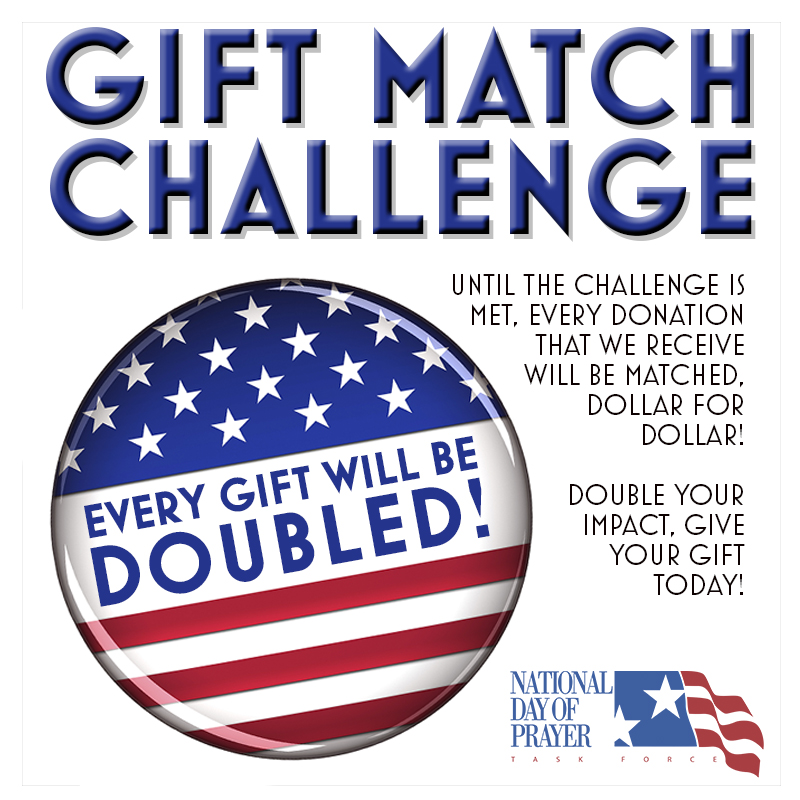