An Example to All

Middle School Students Pray on the National Day of Prayer

Most middle schoolers gather during their school lunch period to eat, talk about their classes, or finish up homework assignments. However, a group of seventh graders in Grand Rapids, Michigan did something a bit different than their peers: roughly 30 kids stood together and prayed during their lunch period on the National Day of Prayer!

“I heard about National Day of Prayer at church, the Sunday before, and I have a group chat with my friends, so I told them about it,” said Eric, the 13-year-old who spearheaded the gathering. “There was like five minutes of talking, and then we were praying for our teachers and kids in our school to have more faith.” 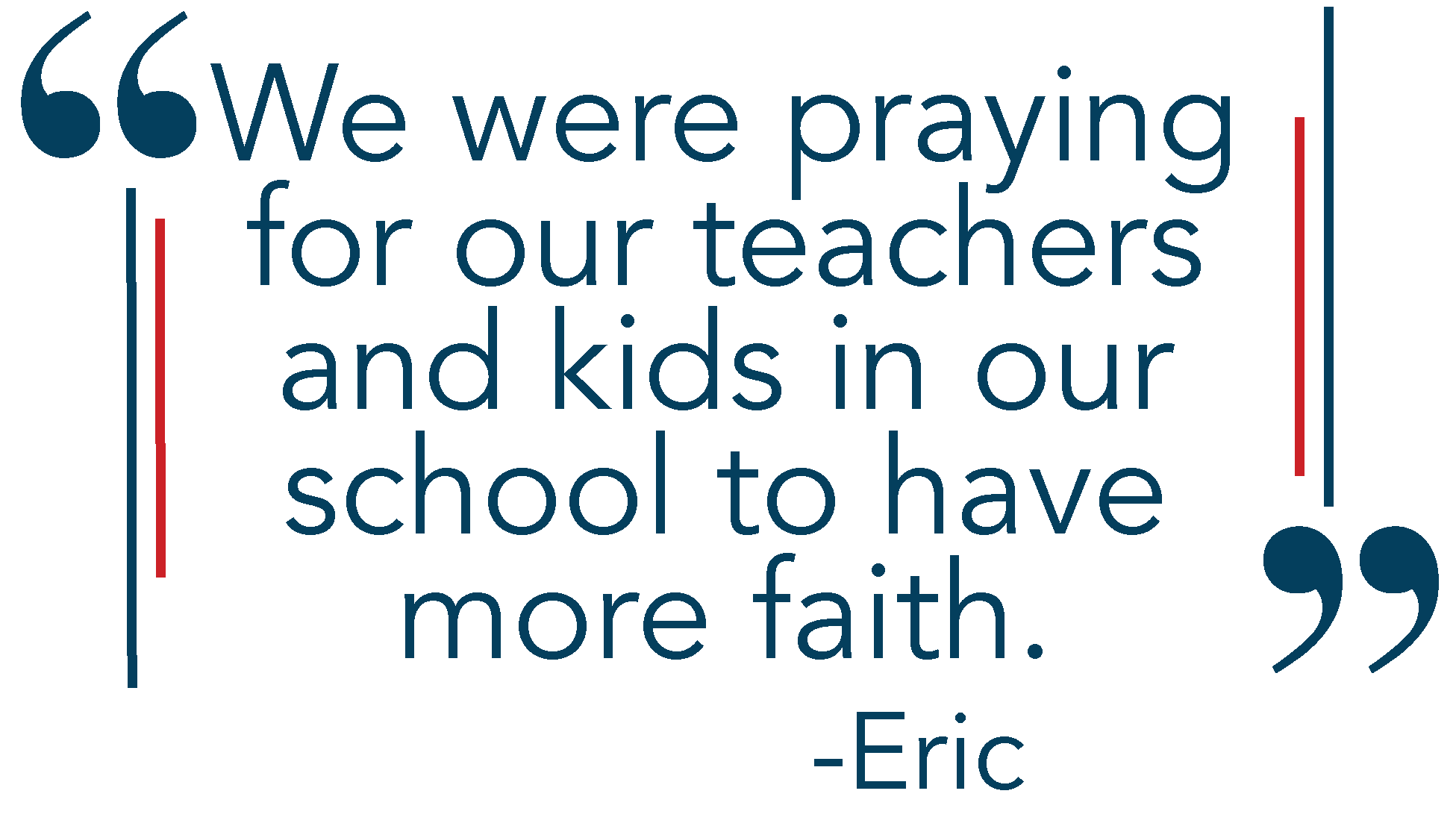 This move of prayer was a culminating event for these students at their public middle school—following the See You at the Pole event in September, Eric saw a desire in his peers to learn more about God, so he texted a few friends to start a weekly Bible study during their lunch period. Several students attended, and they asked the young women in their friend group to help invite more classmates to join. What started out as roughly 20 students has grown to almost 40 since the fall, and each week since, these young people faithfully take time away from socializing during their lunch period to learn about God.

These gatherings are all student-led by an organic move of the Holy Spirit drawing these young people to hear the Gospel. Eric and the other student leaders honored their teachers and principal by getting permission to use a hallway off of their cafeteria to meet in a quieter, less distracting area, but that is the extent of any school involvement. There is no adult behind the scenes facilitating or organizing the bible study.

“When we are done eating, it is easy to ask people, ‘hey do you want to come down to the hallway?’” Eric said.

Before the new term started in January, Eric sat down and planned out lessons for the spring semester. In his planning, he asked some of the spiritually mature students to take turns leading the study and prayers. This way more students would be involved, and it took some pressure off Eric to have a message each week.

“Eric is a kid who takes action, who has a heart for God,” his mom, Marcie said. “He wanted people to actively contribute, and he is building disciples as they rotate who leads.”

The Lord is truly moving in Eric’s life. Last summer at a Never The Same youth camp, Eric felt a call from the Lord to be a pastor. At this tender age of 13 he is living his life to build up the kingdom, and God is opening doors for Eric to step out in faith allow the Holy Spirit to further mold his heart for pastoral ministry. He has hope for other young people, knowing the Lord is not done with his generation!

“There are students around the country all doing things in their schools, spreading the Lord and the Gospel,” Eric said.

The National Day of Prayer fit right into what God has been doing in their middle school, pointing these young believers to the core of the faith—prayer and the ministry of the Word—as Eric and the other student leaders stand up to take their place alongside the teachers and preachers of the Gospel throughout Christian history.

“Let no one look down on your youthfulness, but rather in speech, conduct, love, faith, and purity, show yourself an example of those who believe. Until I come, give your attention to the public reading, to exhortation, and teaching.” 1 Timothy 4:12-13 NASB