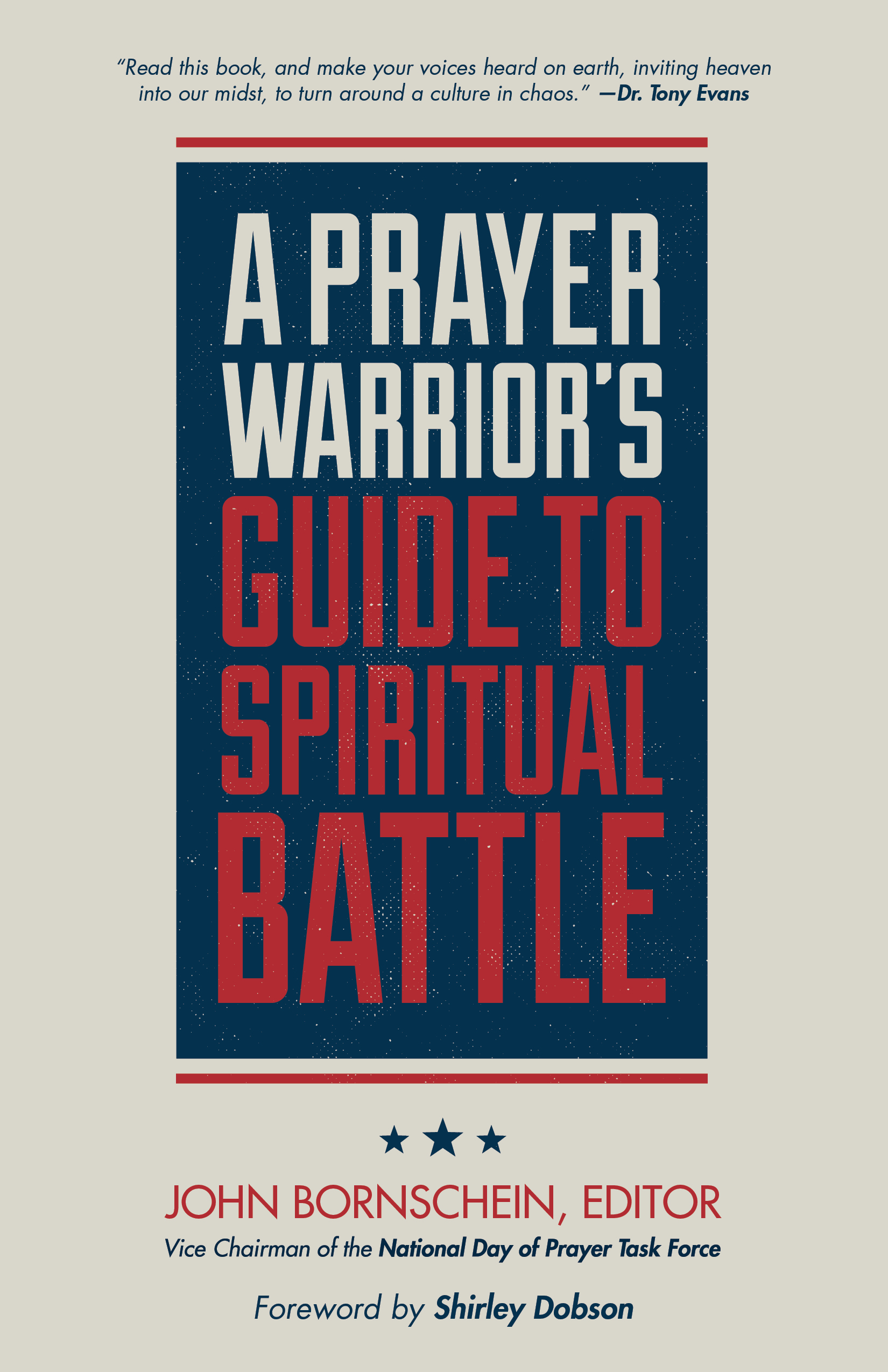 Forget the pastoral settings for prayer cast with rolling meadows and fragrant flowers. National Day of Prayer Task Force Vice Chairman John Bornschein unveils prayer for what it really is—a powerful weapon to be wielded in spiritual warfare. His new book A Prayer Warrior’s Guide to Spiritual Battle is riddled with wartime imagery and anecdotes in a crusade to shake Americans out of the trenches and onto the front line of battle—against the destructive forces dismantling our nation.

Just in time for this year’s National Day of Prayer and only months out from the presidential election, A Prayer Warrior’s Guide, published by Kirkdale Press, releasing April 25 and available at a discounted price through the National Day of Prayer webstore, until May 5, sets out to lay aside many common misperceptions about prayer and set the record—and America—straight. Bornschein, host of Salem’s “Engage in Truth” radio program, is not afraid to sound the battle cry and take the Church through spiritual boot camp. And he has never witnessed a more pressing time for prayer, as he sees the Christian underpinnings of our country being attacked from every side.

“Given the troubling times facing our country, I remain convinced that heartfelt and persistent prayer have never been more crucial,” Bornschein contends. “It is only through the humble intercession of God’s people and His gracious response that we will see healing and revival. As culture continues to crumble by casting out Truth for moral relativism (godlessness and lawlessness), we must realize that the Church is a stronghold in this world. We are lifting the standard on the battlefield, and we must stand firm.”

Bornschein, a frequent guest on the Family Talk broadcast with Dr. James Dobson, argues that even though all Americans are effected by attacks on the Christian foundation of society, most sit quietly on the sidelines while laying down their most powerful weapon—prayer.

“The challenge is that many in the Church don’t know how to pray,” Bornschein insists. “They think they do, but in reality, they don’t understand the mountain-moving power of prayer—a relationship so deep and pure with Almighty God that an audacious faith is unleashed with world transformational power. We are content with mediocrity in our walk with the Lord and thus depriving ourselves of the privilege of being a part of eternal and boundless impact. That is why I wrote this book with some of my esteemed colleagues (Dion Elmore, David Butts and Kathy Branzell)—for the purpose of opening eyes to the battle for the minds of men and how to be effective on the front line through prayer.”

Leaving their fatigues in the closet, many Americans feel stripped of their power and swamped when facing their daily battles without a sufficient covering of prayer. 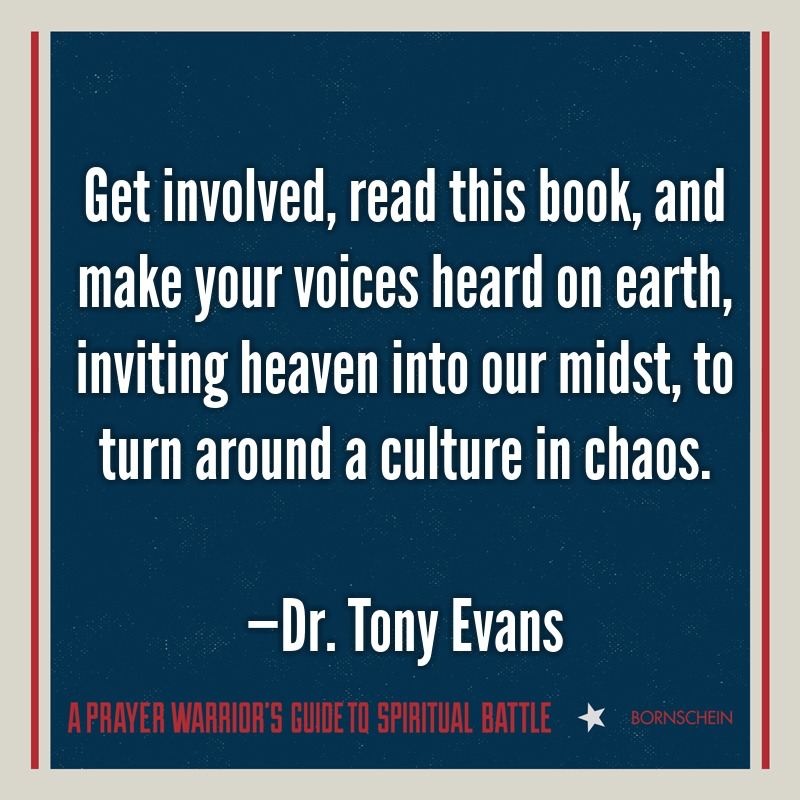 “Christians, especially men, often lump prayer into the category of the intangibles and wield it as a last resort when confronted with difficult situations,” Bornschein explained. “Far too often, it has to be a really difficult situation to merit a little humility to push us to our knees. It is amazing how we struggle with the concept of prayer. We think we are experiencing all that prayer has to offer with our token mealtime utterings or at the bedside blessing with our children as we quote lines from passed-down traditions.”

According to Bornschein, this breakdown is not only experienced in the home.

“Even in seminary, prayer is not a critical focus,” Bornschein adds. “We think too little of the most powerful resource in our arsenal. But we don’t do it intentionally. We are ignorant of the application and thirsty to experience the fullness of relationship with the Almighty. That is why I am excited by A Prayer Warrior’s Guide. It is a book I have spent over four years researching and writing, and I am convinced that it will open eyes and transform the Christian perspective of this multi-dimensional conversation.”

Given the latitude of books on prayer, Bornschein, who also serves as senior pastor at Calvary Fellowship Fountain Valley in Colorado Springs, explains what sets his book apart from others.

“There are many powerful books on prayer … I have my own personal list of favorites from E.M. Bounds to Dr. Dick Eastman, so this book was not designed to simply reiterate those points, but rather to be a field manual for exploring the depth and power of a praying life. Drawing on a variety of perspectives, this book explores prayer from every angle—from its basic elements to the obstacles that hold people back.”

And this book is designed to provide strategy and munitions for everyone—from privates in their prayer lives to four-star generals.

“With inspirational stories, tools and resources, A Prayer Warrior’s Guide to Spiritual Battle enables new recruits and seasoned prayer warriors alike to gain a greater understanding of the number one weapon in spiritual warfare—prayer,” said Bornschein, executive producer of “Drive Thru History: America,” the latest video curriculum in the popular series broadcasted on History Channel International and Trinity Broadcasting Network. “It is my hope that once they have read through A Prayer Warrior’s Guide, they will never see prayer the same way again.”

Bornschein envisions his new field manual as going far beyond the public and political battles at the forefront; it is strategized to penetrate the foundation of society—the family.

“It will revolutionize the Church by transforming the hearts and minds of the family,” Bornschein asserts. “Husbands and wives will see the multi-generational impact as never before, and stagnant minds will be unlocked and empowered with audacious faith.” 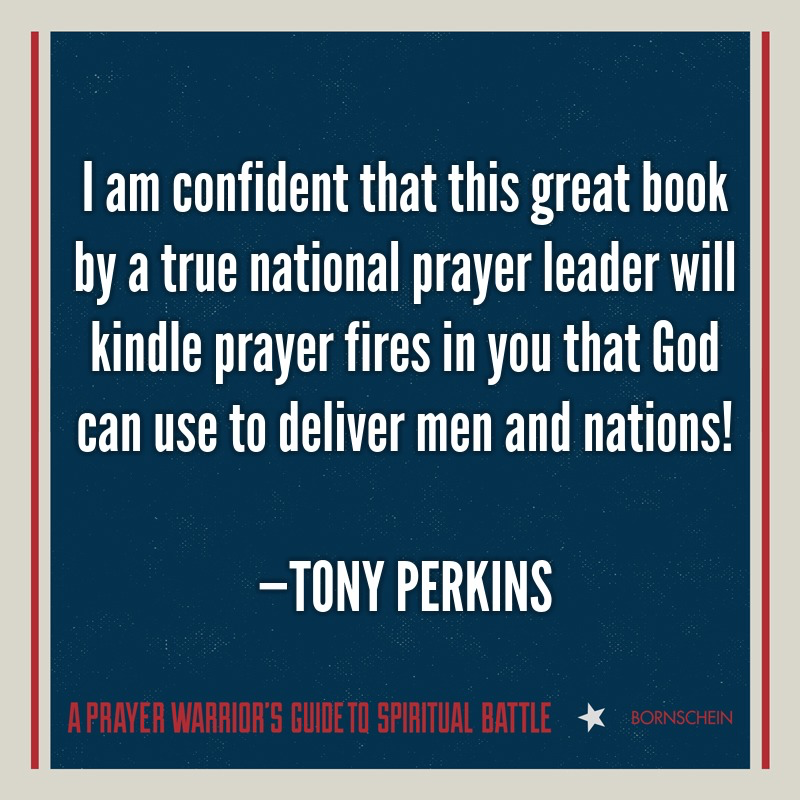 And the timing couldn’t be better to strike at the hearts of Americans with the National Day of Prayer coming up on May 5 of this election year.

“The National Day of Prayer is just around the corner and America needs your prayers, now more than ever,” Bornchein proclaimed. “We continue to face unabated moral decline, economic downfall, military conflict in the Middle East and the ever-increasing assaults against our religious liberty. Given these urgent concerns, it’s imperative that we remain on our knees in contrite supplication for the United States.”

This exhortation to prayer is a call for masses to engage in all-out spiritual warfare.

“In my role with the National Day of prayer, I have witnessed the growth of an amazing movement that is spreading across the world,” continued Bornschein. “We are privileged to fan the flame of this global revival that is capturing the hearts of millions of people. This year, we fully expect to see thousands of events, as many as 40,000 or more, from coast to coast with people fasting and praying on the first Thursday of May. Our theme this year is “Wake Up America” and Dr. Tony Evans is our honorary chairman. Our goal is to see 3 million people engaged in prayer and thousands more making a commitment for Christ.”

Beginning as a tradition back in 1789, the National Day of Prayer (NDP) was officially established as an annual event by U.S. Congress six decades ago, seeing untold millions of Americans coming together every year to humbly call upon God. Despite numerous attempts in recent years to declare the NDP unconstitutional by atheist organization, it continues to stand as a beacon of light, protection and hope for a nation blessed with a unique Christian foundation.

“The need for prayer must be continually impressed in our communities and throughout our nation if we are to preserve the biblical heritage that has enabled America to become great,” Bornschein concludes, reminding America to put on their prayer armor and weaponry through joining him on the front line. “It will lead to a revitalization and renewal of our commitment to Christ that will change the way we live and interact within our spheres of influence. It is a journey I encourage all to experience.”