Alone Yet Not Alone

Based on the inspiring, true story!

Alone Yet Not Alone is the gripping, true story set in 1755 about two young sisters who were captured and raised by Native Americans during the French and Indian War. The sisters are sustained only by their unflinching and abiding trust in God, and their hope of escape against all odds to be reunited with their family. Alone Yet Not Alone releases nationwide on Friday, JUNE 13 (Father's Day weekend) and we're inviting everyone to buy advance tickets or if you're interested in buying tickets for a large group (church, school, etc), please click here 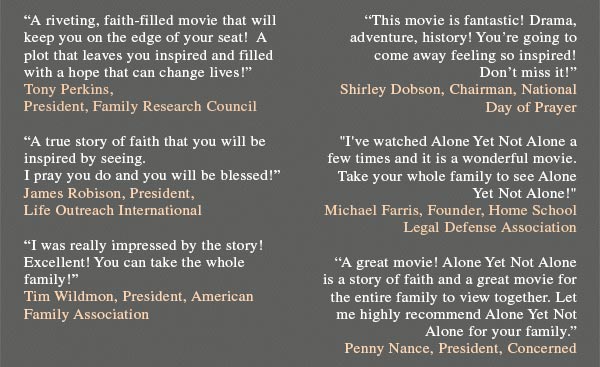 Perhaps you have heard of the recent media attention surrounding Alone Yet Not Alone when its theme song (beautifully performed by Joni Eareckson Tada) received an Oscar nomination, which was hastily rescinded by the Academy. The resulting media attention surrounding the controversy provided an unexpected spotlight on this small, independent movie and we couldn't be more grateful for the supporters.

Help us get the word out by telling everyone you know about this beautiful, true story of God's faithfulness. Learn more